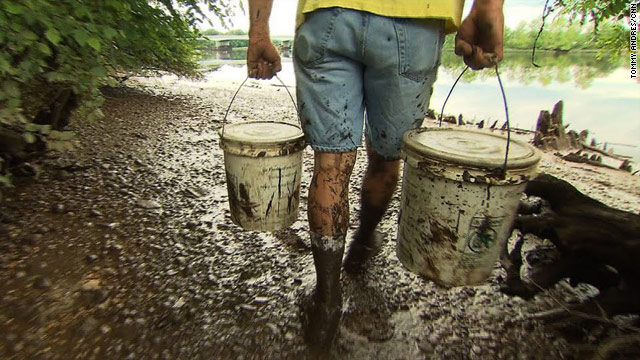 Delran, New Jersey (CNN) -- It's a hot day as Jim Bintliff laces up his "mud shoes" -- a beat-up pair of sneakers still tinged with dirt -- and heads out for one of his last harvests of the year.

The tides are just right. Armed with a stack of buckets, a shovel and a pushcart, Bintliff walk sthrough the woods on a narrow winding trail he has followed for the past 44 years. Then, the forest opens up to reveal a secret fishing hole that lies on the banks of the Delaware River and in the sometimes-quirky pages of baseball history.

"Nobody knows this is where I get the magic mud," Bintliff says.

Out of nine brothers and sisters, Bintliff was the one picked to carry on the family business -- Lena Blackburne Baseball Rubbing Mud.

The unique muck is the only brand used each year by Major League Baseball, and its minor-league affiliates, to abide by a line in the league's rule book requiring umpires to inspect balls and make sure they're "properly rubbed so the gloss is removed."

On August 16, 1920, Ray Chapman, a shortstop for the Cleveland Indians, was crowding the plate in the top of the fifth inning when he was struck in the head by an underhand curve ball from New York Yankees pitcher Carl Mays.

Days later, Chapman became the first and only player killed by a pitch in Major League history.

"From that point forward the umpires were looking for a way to get a better grip for the pitcher on a new baseball," Bintliff says. "They tried tobacco juice, shoe polish, dirt from the infield and all of those things scarred or damaged the leather."

Lena Blackburne, a manager for the Philadelphia Athletics, had an idea. He cured and aged mud from a fishing hole near his home and took it back to the Athletics clubhouse.

There's a little kid somewhere with a baseball on his nightstand and I spit on that ball.
--Chris Van Zant
RELATED TOPICS

It worked, and soon Blackburne was getting telegrams from teams asking for the "magic mud." By 1938 it was used by every team in the majors.

With all of the advances in baseball equipment over the years, the mud is still important, says Atlanta Braves pitcher Tim Hudson.

"A brand new pearl has kind of a slick finish on it," Hudson told CNN. "I don't think there's a hitter that's going to stand in the box without one being rubbed up because you just don't get a real good grip on it. It's pretty dangerous."

Chris Van Zant earns part of his paycheck with his spit.

An assistant manager for the Braves, Chris is the team's only baseball rubber. Before each game, he mixes spit with the mud and rubs the factory gloss off of each new ball.

In his 10 years with the club, Van Zant estimates over 40,000 baseballs have passed through his hands.

"It seems kind of funny," he said. "When you see fans fighting for a souvenir ball that goes into the stands, you're like, 'Well, that ball has my spit on it.' There's a little kid somewhere with a baseball on his nightstand and I spit on that ball."

Surrounded by pictures of his kids, stacks of paperwork and articles clipped from newspapers and magazines, Van Zant sat recently in his office at Turner Field plying his trade.

Working up the spit to rub up nine dozen baseballs a game is no easy task, so he makes sure he has plenty of gum and soda on hand.

"Every guy who does this has his own way of rubbing the baseballs," Chris explains. "But no matter what, you have to spit."

Bintliff claims the secret geography and geology of his mud make it unique.

He skims it with his shovel, carefully removing the top layer and slowly gathering hundreds of pounds of the stuff in buckets before beginning the arduous trek back to his truck.

"If anybody happens to catch me in the act of harvesting mud, I come up with a story to give them a reason I'm putting mud in a bucket," Bintliff says. "I've told people I use it in my garden, I use it for my rose bushes, I use it for bee stings and poison ivy and any kind of story."

He began venturing out with his father, Burns Bintliff in the 1960s after Burns inherited the business from his father-in-law, John Haas.

Haas was friends with Lena Blackburne, who passed the business on when he got too old to harvest the mud himself.

Using the same methods that Blackburne invented more than 70 years ago, Bintliff strains and cures the mud in his own backyard. After it sits for months, he fills each plastic container and sticks on every label with his own mud-stained fingers, shipping out a season's supply -- two 32-ounce cans -- to each team.

Despite cornering the market, Bintliff has never been able to quit his full-time job.

He said the mud only brings in about $20,000 a year and that he still works the overnight shift as a printing press operator to support his family.

But settling for less has ensured that the mud he cures behind his home remains the mud tossed out from behind home plate.

"It's the history and the tradition," said Bintliff, who plans to one day hand the business down to his daughter, Rachel. "It's something I've been doing since I was a kid and I wouldn't give it up for anything.

"From 1938, on all those record home runs and those thousands of strikeouts, my mud's been on every ball."

That will be true tonight, when the first pitch in the World Series is tossed.