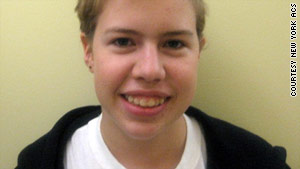 The teen mysteriously turned up in Manhattan, claiming to have no memory of her family, home or name.
STORY HIGHLIGHTS
RELATED TOPICS

New York (CNN) -- Authorities have identified a teenager believed to be suffering from amnesia who was found on the streets of New York two weeks ago.

Police say a CNN viewer in Maryland identified the young woman, who mysteriously turned up in Manhattan two weeks ago, claiming to have no memory of her family, her home or even her own name.

The 18 year old whose name is not yet being released, is in the process of being reunited with her family. They are from Washington state and are on their way to New York, New York Deputy Police Commissioner Paul Browne said on Saturday.

A photo of the woman, who has been referred to as Jane Doe, was circulated by police and aired on CNN this week. The viewer in Maryland was familiar with her situation and knew she had been missing from her family earlier this month.

The girl was found in Midtown Manhattan around 12:30 a.m. October 9 outside the Covenant House youth shelter, although the organization said that she was not a resident at the time and did not appear as if she intended to seek refuge at the facility.

A security guard for the shelter noticed the girl walking on the sidewalk near Covenant House and approached her. Finding her unresponsive, he called the New York City Police Department.

Police officers interviewed the young woman, but it became clear that she couldn't provide authorities with any information about herself. The police said she was wearing military green camouflage pants, a black shirt and a pair of black sneakers when she was discovered.

The children's services agency said the girl recently wrote down the name "Amber" and has responded to it on one occasion, but she has no idea whether it is her true name.

On another occasion she is said to have recalled certain words, which turned out to be an excerpt from the fantasy novel "Fool's Fate" by Robin Hobb. The girl also is apparently writing a fantasy story of her own that features a heroine named Rian, "who's been raised by the commander of the guard post on the edge of a fantasy kingdom," the young woman said.

Judging from her poor dental hygiene, said Lt. Christopher Zimmerman, she appeared to have been living on the streets for some time.