WASHINGTON (CNN) -- Nearly 40 years after members of a U.S. cavalry unit put their lives in peril to save 100 fellow soldiers trapped under blistering enemy fire in Vietnam, they received the Presidential Unit Citation on Tuesday. 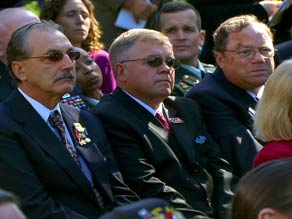 It's an honor their captain says is long overdue.

"These soldiers defined the meaning of bravery and heroism," Obama said at a White House reception honoring the group's heroics.

"It's never too late. You can never say it enough. ... We honor your service, and America is forever grateful."

On March 26, 1970, the 120-member Troop A volunteered to rescue an American infantry company surrounded by an overwhelming enemy force at a site on the Cambodian border called the Dog's Face. The enemy had survived hours of aerial and artillery bombardment and was expected to kill or capture the 100 American infantrymen in Company C within hours. The Americans were running out of ammunition and could not move because of heavy casualties. There were no available landing zones for medical and rescue helicopters to touch down.

Alpha Troop heard of their plight on a radio and rode in with an infantry company to rescue their comrades.

When the battle was over, more than 70 Americans lay dead or wounded.

For retired Capt. John Poindexter, who led the rescue, the award is for all Vietnam veterans, many of whom came home to an unwelcome and sometimes hostile reception.

"The veterans of Alpha Troop feel very strongly that we stand in the stead of all veterans of the war of Vietnam," Poindexter told CNN before the ceremony. "The fact is that we're being singled out for a very distinct honor, a very rare one, but it is our conviction that on any day in any other jungle in Vietnam, nearly every Vietnam veteran would have been willing to assume the task that we assumed on March 26, 1970, when we earned the Presidential Unit Citation."

Poindexter had been trying to gain recognition for his men for the past seven years. Initially, he felt deep disappointment.

In 2003, he discovered that the men he had recommended for decorations for their valor had not received those citations. Eventually, 14 men received individual decorations.

That was not enough.

"My role in obtaining the PUC [Presidential Unit Citation] -- or in helping to obtain the PUC -- among the 200 persons who were involved in this matter over a seven-year period, was to be in the unhappy position of discovering that the men who I had recommended for decorations had not been recommended, had not been awarded those decorations," the retired captain said.

"The result of that was that we got 14 men decorated for their valor, but 14 men out of more than 120 who were engaged in the battle on that fateful day were only a pittance, only a minority, of those who might have been honored. Only a unit citation could honor all equally and impartially, and it was that task we set ourselves on nearly seven years ago. "

He believes lack of popular support for the war had much to do with it taking so long for Alpha Troop to be recognized.

"There's little question in our minds that the unpopularity of the war in Vietnam is a major contributing factor to the reception these men received when they returned to the United States and a major factor, in my opinion, in the silence that most of them have assumed since then," Poindexter said.

"Why talk about something that most people don't have a very high opinion of in all likelihood? And if that isn't true, nevertheless, it's what most of these men think. They were engaged in an unpopular venture that has bedeviled them for much of their adult lives."

Now, the circle has been closed.

"It's a very elevating experience to see the men that I have not seen for 40 years since War Zone C in Vietnam," the former captain said. "These are persons who have had success in life, and some have not had a lot of success in life, and to see how they've turned out, how they look these days, and to know I'll be with them in the White House [Tuesday] is a very fulfilling sensation for me.

"For me, the sensation of being honored is one of having closed an important chapter on my life in a very fruitful and rewarding way."

The Presidential Unit Citation is awarded to armed forces units of the United States and allies for extraordinary heroism against an armed enemy on or after December 7, 1941. The unit must display such gallantry, determination and esprit de corps under extremely difficult and hazardous conditions so as to set it apart from and above other units participating in the same campaign.

All About Veterans' Affairs • War and Conflict • Vietnam