WASHINGTON (CNN) -- The Supreme Court tentatively agreed Tuesday to accept an appeal from a group of native Chinese Muslims who had asked to be released into the United States from American military custody at Guantanamo Bay, Cuba. 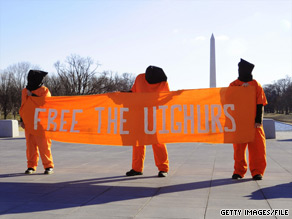 In February, demonstrators in Washington protest the detention of Uyghurs at Guantanamo.

The case may soon dissolve, however, because nearly all the men have been or are expected to soon be sent voluntarily to other nations.

The Pacific island nation of Palau has agreed in recent weeks to take in 12 of the 13 remaining prisoners, U.S. officials have said. Only one man, Arkin Mahmud, is likely to remain held indefinitely at the U.S. naval station at Guantanamo Bay. His lawyer told the Washington Post the man has mental health problems that cannot be treated in the tiny country. Mahmud's brother is among those headed to Palau.

The men are Uyghurs, an ethnic group from western China. They were accused of receiving weapons and military training in Afghanistan. Some of them have been cleared for release since 2003 and several other Uyghurs have been released to other countries. The United States said it would not send them back to their homeland because of concern they would be tortured by Chinese authorities.

The Chinese government has said no returned Uyghurs would be mistreated and has repeatedly warned other countries against taking the men. Beijing officials this summer again urged the United States to hand over all remaining Uyghurs instead of sending them elsewhere.

China alleges the men are part of the East Turkestan Islamic Movement, a group the U.S. State Department considers a terrorist organization, that operates in the Xinjiang region. East Turkestan is another name for Xinjiang.

Eight Uyghurs are a party to the pending appeal with the Supreme Court. In a September 23 letter to the court, Solicitor General Elena Kagan, the administration's top attorney in high court matters, said the U.S. government "has every reason to believe that at least six of the [Uyghur] petitioners shortly will be resettled in Palau, although it is impossible to be certain until they actually board the plane."

Kagan had said the initial transfer would happen by October 3.

Among the lead Uyghur plaintiffs is Hazaifa Parhat, accused of attending a terror training camp in Afghanistan at the time of the September 11, 2001, attacks. He denies the charge.

A federal judge in October 2008 ordered the Uyghurs released inside the United States because they were no longer considered "enemy combatants." U.S. District Judge Richard Urbina had said further imprisonment "crossed the constitutional threshold into infinitum."

U.S. military hearings known as combatant status review tribunals determine whether a prisoner can be designated an "enemy combatant," and prosecuted by the military. Some legal and military analysts have likened them to civilian grand jury proceedings.

The Bush administration appealed that decision in its final days, and a federal appeals panel ruled in February there was no legal or constitutional authority for the prisoners to be immediately freed on U.S. soil, even though they were unlawfully detained and no countries at the time were willing to accept them. The Uyghurs then asked the Supreme Court to hear the case.

Obama administration officials have said privately they were unwilling to launch a constitutional showdown with the Supreme Court on the detainee issue. The Obama Justice Department has concentrated on the negotiations with Palau.

Lawyers for the Center for Constitutional Rights, which is representing the Uyghurs in court, said the men pose no terror threat and could have been released into a Muslim community in the United States until their cases were resolved.

If the Uyghurs all find new homes outside U.S. borders, the former prisoners would no longer have standing to challenge their former enemy combatant status and detention in federal court. The high court then would likely dismiss the appeal at the urging of the government, leaving the larger constitutional issues unresolved.

Bermuda in June accepted four of the Uyghurs, after quiet negotiations with U.S. officials.

"I am no terrorist, I have not been terrorist, I will never be terrorist. I am a peaceful person," said one of those four, Kheleel Mamut, in a June 12 interview with CNN on the Atlantic Ocean island.

Albania accepted five Uyghur prisoners in 2006, but has refused to allow any more in the country. Human rights activists say the European nation is concerned about economic and diplomatic retaliation from China.

Any final decision on the Uyghurs by the high court could have implications for other Guantanamo prisoners. The Supreme Court has consistently ruled that detainees can go to federal court to contest their imprisonment, but that civilian judges lack the authority to order them freed.

In addition to the Uyghurs, more than 200 prisoners, many of them suspected terrorists, remain in the detention facility. Approximately two-thirds have appealed their continued imprisonment and have complained the government is unfairly keeping them from finding out if any evidence exists that could clear them.

Many fear arrest, physical abuse or persecution if they are sent to their homelands, according to the Center for Constitutional Rights.

The Justice Department over the weekend announced three detainees would be sent with their approval to Yemen and Ireland.

Efforts to find places for the detainees have been stepped up since President Obama announced he would close the military prison at Guantanamo in coming months.