(CNN) -- The woman who was denied a marriage license by a Louisiana justice of the peace because he refused to marry interracial couples said the official should lose his job. 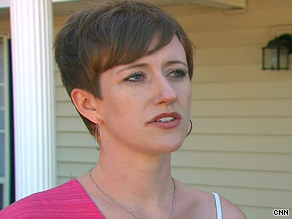 Beth McKay says a Louisiana justice of the peace denied her a marriage license since it was an interracial union.

Beth McKay said she never could have expected what she heard from Tangipahoa Parish's 8th Ward Justice of the Peace Keith Bardwell when she called his office a week ago to officiate her marriage to her African-American fiance, Terence.

McKay spoke with Bardwell's wife to make arrangements for the ceremony.

"At the end of the conversation, she said that she had to ask me a question. She asked if this was an interracial marriage." When McKay replied yes, she was told, "Well, we don't do interracial weddings or marriages."

McKay said she was beyond shock. "We are used to the closet racism, but we're not going to tolerate that overt racism from an elected official."

Louisiana Gov. Bobby Jindal is calling to have Bardwell's license revoked, and Louisiana Sen. Mary Landrieu is calling for his dismissal -- a notion shared by McKay.

McKay later married Terence with the help of another justice of the peace in the same parish.

Bardwell has not returned repeated calls from CNN, but he told a local newspaper in a story published Thursday that he was not a racist and he was concerned for the children who might be born of the relationship.

Bardwell also said, in his experience, that most interracial marriages don't last.

McKay said her friends and family have been extremely supportive and she believes this situation occurred for a reason.

"I just think that God puts you in the right positions at the right time in order to stand up to people who -- who choose to live their lives with hate," she said.

The Supreme Court struck down laws against interracial marriage in the landmark 1967 Loving v. Virginia case. Richard and Mildred Loving, who got married in Washington, D.C., were arrested in their Virginia home with their marriage license framed and hanging on the wall, for the simple fact of being husband and wife.

In the unanimous decision, the Supreme Court said that "Under our Constitution, the freedom to marry, or not marry, a person of another race resides with the individual and cannot be infringed by the state."