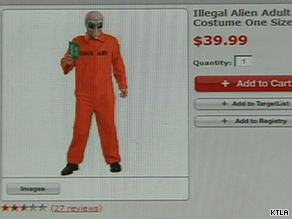 The "Illegal Alien" costume was being offered by retailers including Target, Walgreens and Amazon.com.

The Coalition for Humane Immigrant Rights of Los Angeles said it began receiving e-mails from concerned legal immigrants on Friday. In response, CHIRLA wrote a letter asking several retailers, including Target, Walgreens, and Amazon.com, to stop offering the costume.

As of Saturday afternoon, Target had pulled the products, and some links to the costumes on other sites were no longer functional.

Target said the "Illegal Alien" costume was inadvertently uploaded to its Web site due to a data entry error.

"It is never our intent to offend the consumers with the products we offer," a company statement said.

The makers of the costumes could not be reached for comment on Saturday.

Jorge-Mario Cabrera, the director of communications for CHIRLA, said he initially thought the costume was a stab at harmless satire. But when he saw the Green Card, he realized it was an swipe at illegal immigrants.

"This was an ignorant attempt to poke fun at a small community," said Cabrera.

To some, the attempted humor of the costumes falls flat.

"I have a lot of illegal immigrant friends," said Iglesias. "If I showed them that costume, it would really hurt them."

Despite the controversy, some stores say the costumes have been a hit.

"It's a very well-recommended costume," said an employee at Ricky's, a costume store in New York City. The store has sold seven costumes for $39.99 apiece and is set to receive another shipment.

William Gheen, the president of Americans for Legal Immigration, said he intends to buy the costume, and calls the reaction unfounded.

"The only people getting upset are the hyper-sensitive, over-politically correct, pro-amnesty, illegal alien-supporting nuts," said Gheen. "You can't attack people's freedom in this country."

"I think having a costume like that is distasteful," said Andrea Hill, outside of Ricky's. "But if it's not illegal, I think it's alright for them to sell it."

All About Halloween • Immigration