All-male college cracks down on cross-dressing

ATLANTA, Georgia (CNN) -- An all-male college in Atlanta, Georgia, has banned the wearing of women's clothes, makeup, high heels and purses as part of a new crackdown on what the institution calls inappropriate attire. 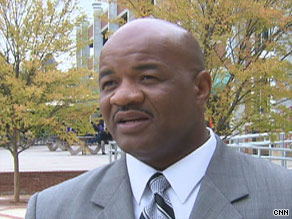 No dress-wearing is part of a larger dress code launched this week that Morehouse College is calling its "Appropriate Attire Policy."

However, it is the ban on cross-dressing that has brought national attention to the small historically African-American college.

"We are talking about five students who are living a gay lifestyle that is leading them to dress a way we do not expect in Morehouse men," he said.

Before the school released the policy, Bynum said, he met with Morehouse Safe Space, the campus' gay organization.

"We talked about it and then they took a vote," he said. "Of the 27 people in the room, only three were against it."

There has been a positive response along with some criticism throughout the campus, he said.

Senior Devon Watson said he disagrees with parts of the new policy, especially those that tell students what they should wear in free time outside of the classroom.

"I feel that there will be a lot of resentment and backlash," Watson said. "It infringes on the student's freedom of expression. I matriculated successfully for three-and-half years dressing so how is this a problem?"

Senior Tyrone McGowan said he has mixed feelings about parts of the policy.

"But I have been inspired by the conversation it has created," he said. "We have to find a way to create diverse leaders from this college. I don't want this to place all of us in one box."

Those breaking the policy will not be allowed to go to class unless they change. Chronic dress-code offenders could be suspended from the college.

"The policy is just saying that you have to show more respect in how you dress and there are things that are just not acceptable at Morehouse," Titus said. "We have a legacy that we are trying to uphold."

All About Morehouse College • Gay and Lesbian Relationships