Their children in Iran, 3 U.S. moms swing into action

By Mary Snow
CNN's The Situation Room with Wolf Blitzer

(CNN) -- Laura Fattal rolls a piece of Scotch tape, attaching a picture of her son and his two friends to a cardboard box. Her calm demeanor doesn't give away the gravity of the situation and the reason why she's in a New York hotel room with two other mothers. 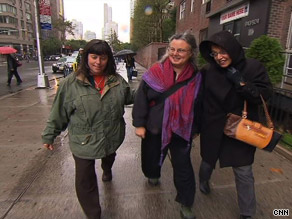 Laura, Nora Shourd and Cindy Hickey have been brought together because their children have been held in Iran since July 31. They have had no contact with their families.

The mothers have put their lives on hold to get them freed.

"We are missing our kids very much," says Fattal.

The women decided what needed to be done was make a direct appeal through the Iranian mission in New York. To do that, they printed out petitions containing 2,500 signatures.

On the eve of delivering them, they worked in their room with boxes sprawled out on a bed as they stacked the petitions inside of them. They recognize names from preschool carpools and baby-sitting co-ops.

Nora Shourd read some of the message aloud.

"Releasing Sarah and Shane and Josh would be a merciful and compassionate gesture that their families would appreciate greatly."

Another one reads: "The Iranians need to understand the young people are adventurous and intend no harm to their people."

Cindy Hickey adds: "Before I go to bed at night, I read the petitions because they help bring strength to me."

Watch the mothers of the kids being held in Iran appeal for their release on "The Situation Room with Wolf Blitzer"
Today, 4pm ET

In late July, 27-year-old Josh Fattal, a teaching fellow, visited them, and they went on a hiking vacation in northern Iraq. According to reports, they accidentally crossed an unmarked border into Iran.

Fattal says they are all experienced hikers, and they chose Iraqi Kurdistan, in part, because it had a cooler climate than Damascus. "... and that's the only reason they were in Iraqi Kurdistan, it was cooler, it was beautiful and it was hiking. And they had no intention of going to Iran."

Thursday morning, the mothers delivered those boxes to the Iranian mission.

"They accepted the petitions. We think it went well. We're encouraged that they accepted them," said Shourd. They're hoping the appeals will ultimately reach Iranian President Mahmoud Ahmadinejad.

"President Ahmadinejad is a father, and I think he can easily imagine how difficult it is for the families of the hikers. We very much see this as a humanitarian issue unrelated to anything else," said Fattal.

The women were encouraged by some public remarks Ahmadinejad has made.

In September he said in an interview with The Associated Press "what I can ask is that the judiciary expedite the process and give it its full attention ... and basically look at the case with maximum leniency."

But since making those comments, nothing has happened.

Swiss diplomats were allowed to visit the Americans in late September. Switzerland handles U.S. consular matters in Tehran because the United States and Iran have no diplomatic relations. The detainees were reported to be in good health.

Hickey says there wasn't much information relayed beyond that but added, "They were able to give them a hug. ... I hope they feel us through that hug," she said as she choked up.

"They offered them chocolate and let them know that we were doing everything we possibly can."

It's hope these women cling to as they keep their phones close by at all times.

"That phone call is going to be very important," says Shroud. "I think we've all rehearsed that phone call about one hundred times in our heads, that first phone call.

"We want that phone call, that consular access, we want them released as soon as possible."

The women say they are taking things day by day, looking for hope. "We do have hope, we do have optimism ... we want to see action," says Fattal.