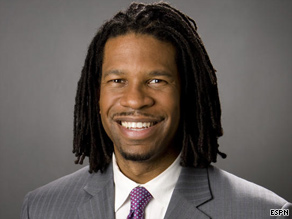 LZ Granderson says the black community should focus on its problems rather than the beliefs of Rush Limbaugh.

That sentiment harkens back to a simpler day in which innocence was not met with sarcasm, a man's word was his bond and yadda yadda yadda. What a bunch of crap.

I would like to know which time period in this country's history that phrase is referring to -- during the witch hunts? Trail of Tears? Television's "Happy Days" would lead you to believe life in the '50s and '60s was all about high school dances and hot fudge sundaes, but many of us know that was hardly the case.

No, if we take an honest look at this country's 233 years, what we will find are moments of brilliance and triumphs, moral bankruptcy and hypocrisy and a great deal of denial and revision by everyone. It is because of our tendency to rewrite unpleasant aspects of our history that we struggle to make the kind of significant social progress we need to truly realize the American Dream.

In other words, ignoring the ugly of the past can stifle the beauty of today.

Typically when blacks talk of the past and about how "things ain't what they used to be," it often is a reference to the civil rights movement and the time in which my community rallied together for a common cause -- equality. We saw remnants of that synergy this week as Al Sharpton, the NAACP and several black NFLers openly opposed Rush Limbaugh's inclusion on a team trying to purchase the St. Louis Rams.

And it is true, we were more willing to be our brother's keepers 40 years ago. But if we're being honest, not all of our brothers and sisters were worth trying to keep back then.

Not every black person was willing to sacrifice self-interest for the better of the whole. Quite a few of us sold out and were more than willing to be puppets or manipulate racial tension to keep crumbs of power or money.

We still had some version of Kwame Kilpatrick to contend with and it's important that we talk about that. It's important that we understand that even during the more triumphant times in our history, there were still plenty of blacks who were agitators profiting from the status quo and that the community had to overcome their self-destructive behavior in addition to systematic racism and violence.

I know, I know, we don't like airing our dirty laundry. But by not talking about the uncomfortable parts of the civil rights movement, we have forgotten that the self-inflicted wounds we face today are nothing new and can be overcome.

We keep following voices that remind us of that era because we have convinced ourselves we still need a black leader to follow. We keep talking about how "things ain't what they used to be" and we haven't taken a close enough look at our history to understand things ain't never been that way.

For example, we chastise today's black athletes for not being Muhammad Ali or Jim Brown, as if every athlete of color from the 1950s and '60s was on the social justice front line, which we know is not true. Still, that doesn't stop us from romanticizing, and those blinders are one of the main reasons why today we do disempowering things like respond to violence in our community based on the race of the perpetrator, not the crime itself.

Limbaugh tried to become a minority owner of a professional football team and some of us behaved as if he was one of the young men caught on video beating Derrion Albert to death in the streets of Chicago.

I'm not a Limbaugh fan but I'm not upset over him being involved in purchasing a team either. I would simply give his squad the same amount of support I give his other projects -- none. There are just more pressing things to focus on.

If the NAACP or NFLPA speaks with NFL Commissioner Roger Goodell on societal or image matters, I would rather they talk about new ways to improve the public education system in cities where NFL teams are located than give an opinion on who buys a team.

Limbaugh may be a racist, but he is not the reason there are more black men in prison than in college. We are.

Our issues did not germinate in a vacuum, but I believe the best way to get out of our socioeconomical malaise is to spend less time looking at what white people like Limbaugh are supposedly doing to us and more time looking at what we're definitely doing to ourselves. More time charting a new course based on personal responsibility, not victimhood and the retelling of stories, because let me tell you, some of those stories have been touched up so many times it's hard to know what's true anyway.

After all, somewhere along the path someone deleted the significant role gay people played in organizing the famed Montgomery bus boycott in 1955 and the 1963 march on Washington.

Somewhere along the path someone Photoshopped out all of the adultery committed by some of the movement's religious leaders.

Somewhere someone shredded the mug shots of those who were arrested for real crimes, not protests.

Making those, and other uncomfortable topics, talking points in the overall discussion does not negate the good that was done. But it does remind us that life isn't black and white.

It reminds us that sometimes you have to peel back a few layers to fully understand what you're looking at.

It reminds us that to err is human, and not wanting to deal with err... well that may be the most common human trait of all.

All About Rush Limbaugh • NFL Football