(CNN) -- The whole world watched Thursday as a lighter-than-air craft set loose by a 6-year-old boy floated above eastern Colorado. 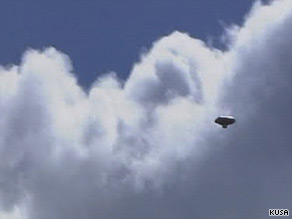 Several media outlets offered to help track the balloon with their helicopters, a sheriff's spokeswoman says.

Web sites as diverse as Al-Jazeera and Australia's Sydney Morning Herald carried news of the wayward aircraft with reports that authorities feared the boy, Falcon Heene, was inside.

The Web sites for The Sun, Britain's largest newspaper, as well as the BBC, posted by-the-minute updates on the aerial odyssey, as did many international sites.

The story was a bonanza for social networking sites.

Facebook, in a little more than an hour, had three fan pages and three groups dedicated to "Balloon Boy." Members were piling on as the story developed.

After the balloon landed near Colorado Springs, law enforcement authorities found it empty, according to CNN affiliate KMGH, which cited a police report.

But while the aircraft was airborne, it was the saucer seen round the world.

"What's interesting about this story is that it played out over a significant period of time," Karns said. "Expressions [on the T-shirts] changed from "Go, Falcon, Go" (when the boy was believed afloat) to "I Believe" (when he was reported missing) and once it came clear the kid, Falcon, was hiding in the attic, the products changed to sort of making fun of the whole thing."

Karns said the Redwood City, California, company received about 200 orders of shirts related to the event by 8 p.m. ET Thursday.

Karns predicted the "Balloon Boy" may become a hot Halloween costume as well.

The attention it garnered also gave some indications of how a real-life flying saucer, an unidentified flying object, may be documented in a high-tech world.

Twitter was inundated with news about Falcon, with the updates occupying seven of the 10 trending topics on the site from 3:30 p.m. to nearly 5 p.m. ET.

While most of the tweets were repeating national headlines about the balloon, some people expressed their opinions along the way.

Tmilewski tweeted, "I call both horrible parenting AND horrible craftsmanship on this one!"

On Reddit, a social networking site known for its hilarious discussion threads about news events, the topic elicited fun and fast dialog.

Neoncow said: "I don't care what they say. A father who builds a flying saucer hot air balloon with his son is a good father."

Lyrus said: "What did Beyonce say to the parents of the 6-year-old kid that flew away in a balloon? If you liked it then you should have put a string on it."

Mossyskeleton: "I wonder if his dad is going to ground him when he gets back."

The Heene family was involved in "scientific experiments that include looking for extraterrestrials and building a research-gathering flying saucer to send into the eye of the storm," the network's Web site said.

Richard Heene, who has posted at least one iReport, calls himself a general contractor, published scientist and inventor.

The aircraft, which appeared to be a Mylar-coated helium balloon, had been tethered to the Heene home in Fort Collins, Colorado, the Larimer County Sheriff's Office said.

Falcon evidently untied the rope anchoring the balloon, and it was feared that he had fallen from the craft. Authorities say that after ground and air searches, he was found hiding in a box in the attic of his family's home Thursday.