More women than men dismissed from military for being gay

(CNN) -- Women were dismissed from the military for being gay at a greater rate than men last year, according to new statistics obtained by a California research group. 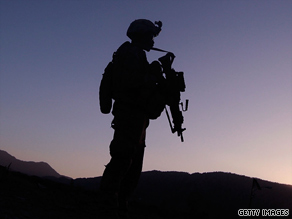 Women were dismissed from the military for being gay at a greater rate than men last year.

All the services kicked out a disproportionate number of women under the "Don't Ask, Don't Tell" policy, according to Department of Defense data obtained by the Palm Center at the University of California, Santa Barbara. The center studies gender and sexuality in the military.

The "Don't Ask, Don't Tell" policy, implemented in 1994, bans troops who are openly gay from serving in the military.

In the Air Force, a majority of those removed were women, the first time a service has had such a record since the implementation of the controversial law in 1994, according to Palm Center senior research fellow Nathaniel Frank.

In addition, the Army removed more women under the "Don't Ask, Don't Tell" policy at a greater rate than men when compared with the ratio of women to men in each service.

Of those discharged under the policy, 36 percent were women, although women make up only 14 percent of troops in the Army, the data showed.

All About GLBT Issues • Armed Forces