Girl, 12, slugged back at Phillies slugger

(CNN) -- Jennifer Valdivia scooped up the baseball after it sailed into the right-field stands. The 12-year-old smiled and giggled over the keepsake from her first Major League ballgame. 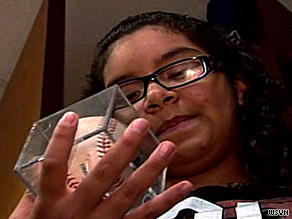 Jennifer Valdivia, 12, holds the record-setting baseball after it was returned this week to her.

She'd have to sue to get the ball back.

This is the story of a baseball and the big leagues, of a young girl, a slugger and a lawsuit. It's about another stain on America's pastime -- commercialism colliding with a kid's innocent joy.

Jennifer's big catch was the 200th home run for Ryan Howard, an All-Star for the Philadelphia Phillies. The 29-year-old first baseman achieved the milestone faster than any player in Major League history, in his 658th career game, 48 fewer games than the previous record.

The ballclub wanted to give the ball to its star player. And that's where things got complicated.

It was mid-July. The Phillies squared off against the Florida Marlins at Land Shark Stadium near Miami.

Jennifer was in the stands with her 69-year-old grandfather, her 17-year-old brother and one of his friends. Howard launched his history-making homer in the sixth inning, a solo shot to right field.

The sixth-grader beat her older brother to the ball. Nearby, fans said they couldn't believe a girl came away with the prize.

"I was rubbing it in my brother's face," Jennifer later recalled. He'd been to many games before, but had never caught a homer ball. "I got a ball and you didn't," she teased.

Excitedly, Jennifer called her mom on the phone. "Mom, I got the ball!"

Moments later, the Marlins sent a team representative to the stands. Jennifer and her brother, Gian Carlos, were escorted to the Phillies' clubhouse. Their grandfather, a Cuban immigrant who doesn't speak English, stayed in his seat.

A Phillies employee, Jennifer says, told her if she handed over the ball, she could come back after the game, meet the slugger and get him to autograph it. She gave the ball up. In exchange, she got cotton candy and a soda.

Jennifer went back to her seat but returned to the clubhouse after the game -- this time, with her grandfather and the rest of her party. They waited. The Phillies slugger never showed up.

A security guard walked up and gave Jennifer a ball autographed by Howard. But it wasn't the one she caught.

This ball was clean and polished. Jennifer calls it "the fake one."

Howard told reporters after the game that he was proud of his feat. He eclipsed Hall of Famer Ralph Kiner, who played on three teams from 1946 to 1955. Kiner's record had stood for more than a half-century.

When Jennifer's mother, Delfa Vanegas, got wind of what happened, she wasn't happy. She grilled her daughter about giving up the prized possession.

"What do you want me to do, Mom?" Jennifer said. "They were asking for the ball."

Vanegas' motherly instinct kicked in. She felt her daughter had been duped, robbed of something potentially worth thousands of dollars.

She contacted the Phillies and asked for the ball. In baseball parlance, the Phillies balked. But the team did offer to give the family VIP tickets the next time they played in Florida.

"I don't want tickets," Vanegas replied. "I want the ball back."

Entering the batter's box: attorney Norm Kent. He first approached the Phillies in July with his simple demand: Give the girl her ball.

Letting fans keep the home-run balls they catch is a time-honored tradition. It's a way for ordinary fans to connect with the superstars -- and to cash in on the catch if history has been made.

Durante offered to give it to Maris, but the Yankees slugger declined. "He said: 'Keep the baseball and try to make some money with it,'" Durante once told the Baltimore Sun. He sold it for $5,000 -- what amounted to a year-and-a-half's salary for Durante. See where historic baseballs are now

Howard's ball is small potatoes in the world of sports memorabilia, maybe worth a couple thousand bucks on the open market. But it's hugely sentimental to the player -- and to the girl who caught it at her first ballgame.

So, Kent's efforts to get the ball back for his young client met with resistance.

There was no way of knowing "with any degree of certainty whether the ball delivered was in fact the home-run ball," Phillies attorney William Webb wrote in a brush-back letter dated August 6.

If the girl wants the baseball, Webb continued, contact Howard's agent, "since the player now has the ball."

By Monday of this week, with the regular season over and no ball in hand, Kent took the extraordinary measure of suing on behalf of Jennifer. He sought the ball and a judgment "in excess of $15,000."

The ball was promptly returned.

"My ball," Jennifer says with a smile.

The Phillies, in the middle of a pitched playoff battle, have declined comment on the ball brouhaha. Howard's agent, Terry Prince, told CNN affiliate WSVN: "He's willing to give the ball back to her without any strings attached. Free of charge."

As part of the settlement, Kent said Howard and the Phillies agreed to pay his attorney fee, about $1,000.

Jennifer has no plans to sell. She keeps the ball in her room, hidden near her bunk so friends can't take it.

Her message to ballclubs and millionaire players?

The next time a child catches a home-run ball, let the kid keep it.

Or, if you're going to take it away, at least ask a parent first.