WASHINGTON (CNN) -- The Supreme Court offered conflicting concerns Wednesday over a cross, erected as a war memorial, that sits on national parkland in the Mojave Desert and whether it violates the constitutional separation of church and state. 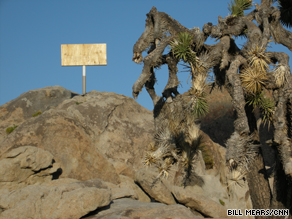 A judge ruled that the Mojave Cross must be covered until a First Amendment issue can be resolved.

Conservative members of the bench suggested that Congress acted properly when it tried to transfer land around the Mojave Memorial Cross to veterans groups, an effort to eliminate any Establishment Clause violation. A federal appeals panel had blocked that land swap.

"Isn't that a sensible interpretation" of a federal court injunction banning the display on government property, Justice Samuel Alito asked.

But Justice Stephen Breyer was adamant that the government had not acted in good faith. "You are violating this injunction" that ordered removal of the cross, he told the government's lawyer.

Watch how justices split over cross »

The swing vote -- as he is in many hot-button issues -- may be Justice Anthony Kennedy, who questioned attorneys on both sides but did not indicate how he was leaning.

At issue before the justices is whether the display violates the first 10 words of the Bill of Rights: "Congress shall make no law respecting an establishment of religion."

More specifically, can one individual who protests the cross have legal "standing" to take his case to court and prevail? And do congressional efforts to minimize the appearance of a constitutional violation carry any weight?

Find out more about the other cases before the court »

The 6-foot Latin cross was erected by the local Veterans of Foreign Wars in a remote part of the California desert in 1934 to honor war dead. It has been rebuilt several times over the years, and Easter services are held on the site every year.

The land now is part of the Mojave National Preserve, a unit of the National Park Service, encompassing 1.6 million acres, or 2,500 square miles.

A former Park Service employee brought suit, saying that such symbols represent government endorsement of the Christian faith. A federal appeals court ultimately agreed and rejected a move by Congress in 2003 to transfer a tiny portion of the land where the cross sits back to the VFW as a privately held national memorial.

The area in question is a prominent outcropping known as Sunrise Rock.

The appeals court noted that the land-transfer effort singled out the VFW for special treatment and that officials had rejected a proposal to erect a nearby Buddhist "stupa," or shrine. Jewish and Muslim veterans groups complain that the Mojave Cross symbolizes the sacrifice of Christian veterans, excluding other faiths.

The oral arguments focused almost exclusively on the congressional action to transfer the cross to private hands. That suggested a very narrow ruling in coming months, which would not produce a sweeping statement on when religious symbols on public land represent state "endorsement" of a particular faith.

Solicitor General Elena Kagan, defending the continued presence of the cross, said it was "a sensible action Congress took" to cure any First Amendment violation.

Chief Justice John Roberts appeared to support the government but did note the danger of Congress "singling out someone, a private property owner, who's using his property in a particular a religious way." When Kagan suggested that the government could put up a sign noting the cross was privately owned and operated, Roberts was unconvinced.

"But it hasn't done anything like that. It doesn't say for other property owners that have a ramshackle shack, that they want people to know this isn't the government's property," Roberts said. "Under your hypothetical, it would be only religious property that would have these special warning signs."

The ACLU is representing Frank Buono, the former Park Service employee who raised his objections in the original lawsuit. Attorney Peter Eliasberg told the court that "the government had favored one party to come on, contrary to the government's own regulations, and erect a permanent symbol while not allowing others."

Scalia scoffed at that suggestion. "I don't think you can leap from that to the conclusion that the only war dead that that cross honors are the Christian war dead. I think that's an outrageous conclusion."

Several hypotheticals were offered by members of the bench, possibly indicating how broadly or narrowly their ruling will be applied.

Justice Ruth Bader Ginsburg wondered whether the donated Argonne Memorial Cross at Arlington National Cemetery should be dismantled. Eliasberg thought not, because a range of religious symbols appear on nearby individual gravestones.

What if a cross went up on the National Mall, next to the Lincoln Memorial, Stevens asked.

How about selling only a square foot around the Mojave Cross to private hands, Roberts asked. The legislation would have permitted one acre to be sold.

Some veterans groups have come out strongly in support of the cross.

"The real goal of the veterans group is to stop this really disgraceful conduct of having war memorials that have been up for 75 years be coming under attack because of political correctness or whatever mood of the day," said Kelly Shackleford, director of the Liberty Legal Institute, representing the VFW. "This was not put up by the government. It was put up my veterans. This is the symbol they chose."

Eliasberg took a more personal stand after the arguments. "My father is a Jewish war veteran, my grandfather was a Jewish war veteran in World War I, and to say that a cross represents the sacrifice of the 250,000 Jews who fought for this country in World War I is simply not true, and it's very rare that the government chooses the predominant religious symbol of one religion and puts it forth and says this honors us all."

All About U.S. Supreme Court • Religion