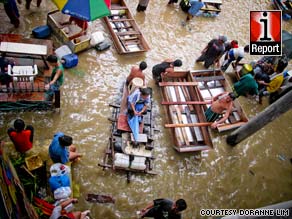 This week in iReport, we received compelling images and stories from major international natural disasters: a tsunami in the Samoan Islands and flooding in the Philippines from Typhoon Ketsana. Pittsburgh, Pennsylvania, hosted the G-20 summit, and iReporters chronicled the scene as protesters and police clashed in the streets. One iReporter, Chris Morrow, won an award at the San Diego Film Festival. Check out the video here

, or get a better idea of the stories below.

• Typhoon Ketsana: Floods from Typhoon Ketsana have left parts of the Philippines under water, killing at least 240 people. Residents in Manila say it's the worst flooding they've seen in decades. Residents constructed makeshift rafts to cross the water, some more successful than others. Some of the most compelling images come from photographer Doranne Lim, who showed us the flooding in Pasig City. We put together a gallery of her photos that chronicle the flooding.

• G-20 protests: As Pittsburgh hosted the G-20 economic summit, iReporters were there documenting the scene. Businesses boarded up, parts of the city were closed off, and protesters and police clashed in the streets. Several citizen journalists captured photos and video of crowds backing away from tear gas and smoke bombs. "As a person that's lived in Pittsburgh their entire life ... I have never seen something like this," iReporter Emily Rice said.

• Chris Morrow wins film festival: One of our superstar iReporters, Chris Morrow, made news of her own recently. Her film "Wyland Earth Day" debuted at the San Diego Film Festival in California and won the Best San Diego Film Award. The film follows environmental artist Wyland as he paints a huge mural of the Earth on the roof of the Long Beach Arena. Equally cool: that fellow iReporters were there to share the experience, including TommyYune, MelissaF, promisenews, TheVideoMan, mvalgal, madmurph, dpkronmiller, Thetalesend and cookiecutter. Together, they created the very first San Diego iReport meetup.