SPRING HILL, Tennessee (CNN) -- The town that Saturn put on the map is worried about its future and its residents hope the auto plant and jobs won't go the way of its most famous product. 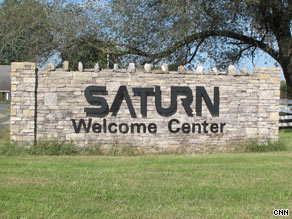 The move to shut down Saturn has left some in Spring Hill, Tennessee, disappointed and perplexed.

General Motors announced this week that it would close its Saturn line after its sale to Penske Automotive Group fell through.

The first Saturn, a red S-Series, rolled off the line in 1990 and it's still on display at the factory. The factory, along with the town, have played a major role in the company's image and advertisements, even hosting tours and "reunions" for Saturn car owners.

At City Hall, the walls are decorated with old photos of the small town Spring Hill was before Saturn came to town and what it's grown into.

Mayor Mike Dinwiddie credits most of the town's growth to the Saturn plant. "GM, back in the mid 80's, is the reason this town began to grow in the first place," he said.

Eventually, GM decided to move production elsewhere. The last Saturn made in Tennessee rolled off the line in 2007. After retooling, GM started building the Chevrolet Traverse in Spring Hill, but that production is now on its way out too.

In November, it will be moved to a plant in Michigan, leaving Spring Hill's plant idle.

The move to shut down Saturn has left some in town disappointed and perplexed.

"It's been a great car," remarked Keith Slep who runs an auto repair shop a few miles from the factory. Slep said he hoped Penske would have been able to keep the brand viable.

"He has a track record that won't quit of being a great business man and a good leader. I don't know what happened," Slep said.

Williams said she was also stunned about the end of Saturn.

"I'm like everyone else, 'How can this happen?' GM has been a forerunner in the automobile industry, and it's just a really sad indictment on what is happening," she said.

"We are kind of curious as to why the decisions have been made that have been made," Dinwiddie said. "I do know that what GM is trying to do now as a company -- as far as how they are trying to operate and what they are saying the improvements they need to make -- almost mirror what Saturn was 20 years ago."

As for the future of Spring Hill, Dinwiddie is optimistic.

"I have to believe the plant is going to come back. It all depends on the overall economy," he said. "I hope that Americans start buying American products and start supporting the American auto manufacturing industry and if that happens, we'll get a product in this plant."

Dinwiddie said he has been working with General Motors on a daily basis, and has invited President Obama and the auto recovery czar to come and tour the plant.

"I don't think they understand what this plant is capable of doing and once they see that, I think that they will be well aware of the situation, and I think they could probably give us some help," he said.

At 94, G.W. Bowman has lived in Spring Hill most of his life and remembers stories of his grandfather collecting the mail in the area during the Civil War.

With Saturn gone and the local plant preparing to idle, Bowman said, "Of course, it's going to hurt, but it's not going to kill Spring Hill."