(CNN) -- Searchers in California say they have found and identified the wreck of a fighter jet that disappeared into the Pacific Ocean near Los Angeles International Airport nearly 54 years ago. 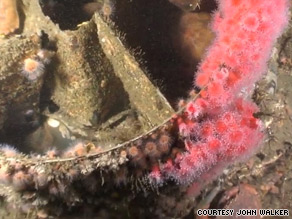 Searchers found the wreckage of a T-33A jet on the Santa Monica Bay floor. The jet disappeared in 1955.

The searchers were looking for another missing plane when they came upon the wreckage of a Lockheed T-33A jet trainer, said Pat Macha, an aircraft archeologist who has identified about 3,700 crash sites and visited more than 800.

"It's a funky thing," Macha said Tuesday. "You're looking for one aircraft, and you find another."

The T-33 disappeared shortly after taking off on an early-morning training navigation flight October 15, 1955, an Air Force Aircraft Accident Report says. Two crewmen were aboard. The plane had been presumed lost at sea all these years.

The discovery started this year near Austin, Texas, where computer expert Gary Fabian found "what looked like a few little pixels" on a high-definition U.S. Geological Survey image of the Santa Monica Bay ocean floor.

Fabian is the founder of a group of unpaid sleuths who discovered a missing World War I German U-boat off the California coast in 2003. The group, known as UB88.org, has continued to search for other wrecks.

Before moving to Texas, Fabian became interested in military aircraft wrecks and found Macha about five years ago in Huntington Beach, California.

Macha told him about his search for the wreckage of a P-51D Mustang fighter flown by World War II Women's Air Force Service pilot Gertrude V. "Tommy" Tompkins Silver. The plane was presumed lost at sea in 1944.

Of the 38 WASP pilots who lost their lives in World War II, Macha said, Silver's is the only wreckage that has not been found. Macha has been searching for the wreckage for 11 years.

Silver's 100-year-old sister lives in Florida, Macha said, and he would like to find the wreckage so she can know what happened.

From Texas, Fabian sent the map info to Ray Arntz, owner and operator of a southern California dive company and a fellow member of UB88.org.

Arntz and some his employees set out to search three wrecks using side-scan sonar. Two turned out to be boats. They weren't sure about the third.

"I just grabbed a tank and went down to look at it," Arntz said.

He saw a fairly compact debris field with a lot of aluminum, which indicated that it was an airplane. Then he saw landing gear.

A manufacturer's number on a feed mechanism for a 50-caliber machine gun started him and the others toward piecing together what they had found. The engine appeared to be a jet, so he knew it wasn't the Mustang, which had a propeller motor.

By that point, Arntz said, "We know it's not what we're looking for."

The manufacturer's number indicated that it was a T-33 Shooting Star. Researching government documents, the searchers found that a T-33 had disappeared in the area.

That was about a month ago. The searchers kept quiet about their find until family members could be notified. Macha said he spoke with a relative of one of the two crew members a few days ago.

The searchers had another reason for initially keeping silent about their find.

"We're trying to quietly do this stuff and move on so the sites don't get ravaged," Arntz said.

The group also found a B-36 Peacemaker bomber near San Diego last year. The plane disappeared in 1952.

For the three searchers, finding wrecks is an unpaid passion.

"We do this fairly consistently," said Arntz, 61. "As amateurs, this is our form of recreation."

Said Fabian with a laugh, "It's an absolutely money-losing proposition."

Fabian, 46, is an ex-sports fisherman who says he has an "obsession" with the water and an "interest in the maritime history of Southern California."

Macha, 64, says he got interested in aircraft wrecks in the 1960s when he found a crash site while working in a Boy Scout camp in the San Bernardino Mountains.

There are 2,500 crash sites in California, he said, where all or parts of an airplane still remain. Some of them are chronicled on his Web site, aircraftwrecks.com.

All About Los Angeles • U.S. Air Force • Accidents and Disasters