PITTSBURGH, Pennsylvania (CNN) -- Lined up next to Pittsburgh police officers protecting a downtown office building Thursday morning were officers who traveled a little farther to get to work. 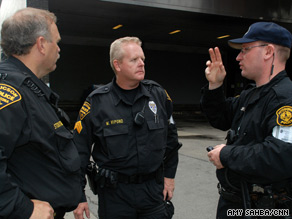 Police officers from Tucson, Arizona, left, talk with a Pittsburgh officer Thursday outside the G-20 summit.

Thirty-six officers from the Tucson, Arizona, Police Department are in Pittsburgh as part of the G-20 security force. They were asked to assist by Pittsburgh officials as part of a Department of Homeland Security rapid response team.

Officers from departments in several cities, including Cleveland, Ohio; Miami Metro Dade, Florida; Baltimore, Maryland; and Chicago, Illinois, were sworn in as part of the massive security effort, but Tucson wins the prize for the greatest distance traveled.

Watch how Pittsburgh has prepared for protests »

The Arizona officers were asked to come to Pittsburgh after taking part in the protection effort at the Republican National Convention in 2008 in St. Paul, Minnesota.

The downtown Pittsburgh street on a morning with temperatures in the 50s was nothing like a typical day for the officers. "It's a different environment," Sayre said -- but the job was the same. "We're excited to be here. It's a lot of fun."