PITTSBURGH, Pennsylvania (CNN) -- Leaders representing 90 percent of the world's economic output were gathering Thursday in a U.S. city that has reinvented itself, hoping to bolster the global economy. 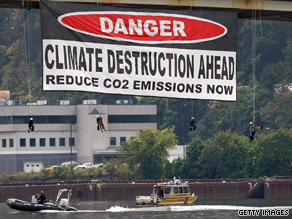 Police boats pass under Greenpeace activists as they hang from a bridge near the G-20 summit.

The Group of 20 will meet for two days to focus on the worldwide financial crisis, and plot how to avoid a repeat in the future.

The White House is using the economic summit to showcase Pittsburgh -- a city that President Obama says has exhibited an innovative 21st-century recovery after a well-publicized downfall following the shuttering of much of the city's steel industry.

Pittsburgh "has transformed itself from the city of steel to a center for high-tech innovation -- including green technology, education and training, and research and development," the president said.

Watch what summit means for Pittsburgh »

Most of the world leaders have come from New York, where they attended the start of the U.N. General Assembly. The G-20 gathering is Obama's first time hosting a major international summit.

"As the leaders of the world's largest economies, we have a responsibility to work together on behalf of sustained growth, while putting in place the rules of the road that can prevent this kind of crisis from happening again," the president said in a statement ahead of the gathering.

Venezuelan president Hugo Chavez talks to Larry in a major TV interview. What does he think of President Obama and the U.S.?
Tonight at 9 ET

The tightening of global financial regulations is expected to top the summit's agenda and comes as some major economies are beginning to recover. Germany, France and Japan have announced that they have emerged from recession, prompting hopes that the worst of the financial crisis may have passed.

G-20 finance ministers and central bank governors agreed at a meeting this month not to start cutting back just yet on stimulus efforts. They fear it would put economies at risk for plunging back into recession.

However, the economic outlook has improved enough that countries are being encouraged to start working on exit strategies, which will vary by nation.

The ministers also have proposed a change in how bankers' bonuses are awarded. They said financial rewards should be based on long-term merit, instead of short-term risk-taking.

Because of that, ministers oppose paying large bonuses upfront. A proposed bonus control mechanism would pay for results over a longer window for measuring profits. Bonuses would be forfeited if initial success doesn't hold up.

The economic summit will be the third time in a year that the world's top industrial powers have gathered. They met in November in Washington and followed up with an April session in London.

As the leaders headed to Pittsburgh, four people attached to a massive banner dangled from a Pittsburgh bridge Wednesday to protest the global economic meeting. iReport.com: Pittsburgh braces for protests

The banner hung from the West End Bridge over the Ohio River and read like a road sign: "Danger: Climate Destruction Ahead. Reduce CO2 Emissions Now."

Greenpeace, the environmental activist group, claimed responsibility for the stunt. On its Web site, the group said it wanted to send a message to G-20 leaders with the nearly 80-by-30-foot sign, calling for more attention to the issue of global climate change.