PITTSBURGH, Pennsylvania (CNN) -- In what appeared to be the most visible demonstration yet of this week's G-20 summit, four people attached to a massive banner dangled from a Pittsburgh bridge Wednesday to protest the global economic meeting. 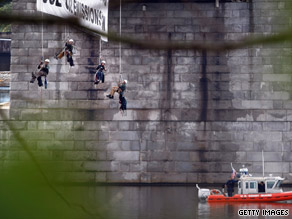 Four people attached to a massive banner dangle from a Pittsburgh bridge Wednesday to protest the G-20 summit.

The banner hung from the West End Bridge over the Ohio River and read like a road sign: "Danger: Climate Destruction Ahead. Reduce CO2 Emissions Now."

Greenpeace, the environmental activist group, claimed responsibility for the stunt. On its Web site, the group said it wanted to send a message to G-20 leaders with the nearly 80-by-30-foot sign, calling for more attention to the issue of global climate change.

"It is also critical that G-20 leaders agree to kick-start economic recovery through clean energy investment," said Damon Moglen, Greenpeace USA's global warming campaign director, in a message posted on the group's site. "It is imperative that developed world leaders do not fail again in Pittsburgh. They must put money on the table to support developing countries."

Pittsburgh police arrested nine people in connection with the bridge incident, on charges that included possession of instruments of a crime, disorderly conduct, conspiracy and obstruction. A police spokesperson described the bridge demonstration as a "very, very dangerous situation."

Police also stopped a second Greenpeace group with a banner from repelling off another bridge. Police arrested five people in connection with that incident. iReport.com: Are you in Pittsburgh?

The two-day Group of 20 summit, which is bringing leaders of the world's industrialized nations to Pittsburgh, begins Thursday.