NEW YORK (CNN) -- The town of Bedford, New York, is not happy with a tent set up as part of Libyan leader Moammar Gadhafi's visit to the United States for the United Nations General Assembly, a town attorney said Tuesday. 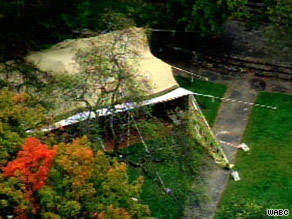 The tent is on property that Libyan leader Moammar Gadhafi is renting in New York, WABC reported.

Sachs said if he had to he would take the issue to a higher court to get the tent taken down.

The property is owned by the Trump Organization, which said in a statement: "We have business partners and associates all over the world. The property was leased on a short-term basis to Middle Eastern partners, who may or may not have a relationship to Mr. Gadhafi. We are looking into the matter."

County Executive Andy Spano said earlier Tuesday he had heard unconfirmed reports that Gadhafi may be staying there.

"There is no legal way to prevent this, as he is a head of state, despite the fact that he has a long history as a terrorist," Spano said in a statement. "However, from my point of view, he is not welcome in Westchester."

State Department officials said there are no limitations on Gadhafi's visa that would prevent him from traveling to the area. They said their understanding was that Gadhafi was not staying at the tent, but was visiting and having meetings there. He is staying in New York, the officials said. The U.N. General Assembly begins Wednesday.

Under the Foreign Mission Act, the United States does have the right to restrict travel by diplomats to within a certain distance of U.N. headquarters, but the officials said Westchester County is within that radius.

Last month, Gadhafi stirred up anger when he permitted a large welcome for Abdelbeset Ali Mohmed al Megrahi, the Libyan convicted of the bombing of Pan Am Flight 103, which exploded over Lockerbie, Scotland, in December 1988. Al Megrahi was released by Scottish authorities on compassionate medical grounds, and the celebration of his homecoming infuriated some families of the Pan Am 103 victims.