(CNN) -- Mexican smugglers trying to find new routes into the United States are turning increasingly to the Pacific Ocean for a short sail to the California coast, where they drop off illegal immigrants and marijuana, U.S. officials say. 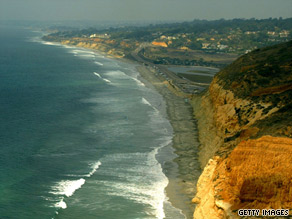 The Pacific Ocean around the California coastline is being used more often by Mexican smugglers.

The water route has become particularly popular in the past year.

"We've seen a huge spike in smuggling by water," said Lauren Mack, a spokeswoman for the Immigration and Customs Enforcement office in San Diego, California. "It's become very, very risky and difficult to cross by land. Smugglers try to jump where they think we're not looking."

U.S. Coast Guard Capt. Thomas Farris, the top-ranking Coast Guard official at the Port of San Diego, said interdictions of human cargo on the Pacific have doubled since last year. Drug busts -- all marijuana -- are even higher, he said.

"Drug interdictions are six times above what they were last year," Farris told CNN Wednesday.

So far this year, he said, authorities have confiscated 60,000 pounds of marijuana and caught 400 people trying to sneak into the United States.

The water route has become popular, he said, because "the land border has been so severely closed by Customs and border agents."

That land route was particularly difficult Tuesday for smugglers who tried to speed three vans full of illegal immigrants through the San Ysidro border crossing between Tijuana, Mexico, and San Diego, California. San Ysidro is the busiest land border crossing in the world, with up to 45,000 cars and 95,000 people passing through each day.

One Immigration and Customs Enforcement (ICE) and two Customs and Border Protection agents opened fire, wounding two suspects, officials said. Another two people were injured when one of the vans crashed into another vehicle.

More than 70 people aboard the three vans were captured as were two of the drivers, authorities said. One driver ran back into Mexico and got away, officials said.

The San Diego Police Department is investigating the shootings because they occurred within the city limits, said police Lt. Kevin Rooney.

Tuesday's incident was the second shooting in less than a week in San Diego involving federal authorities. Two Border Patrol agents are under investigation after shooting at a smuggling suspect they believed was trying to run one of them over with a vehicle, Rooney said. That suspect also was wounded.

Why anyone would try to run a heavily secured checkpoint in Tuesday's incident may be beyond comprehension to some people. Rooney said he understands.

"There's a sense of desperation that exists these days trying to get folks across the border," he said.

"What was surprising," she said, "was the brazen attempt in a very public area in the middle of the day, to assume that they could run the port of entry in today's world.

"That's not too smart," she added. "What do they call that? Felony stupid?"

Mack and Angelica Decima, a spokeswoman for the Customs and Border Protection office in San Diego, have noticed another phenomena: young people taping drugs to their bodies and trying to walk across the border. Many of them are high school students, Mack said. They can make $200 to $300 for each trip, said Decima.

But it's the Pacific route that has become more common -- and increasingly dangerous, officials say.

Smugglers often use small fishing boats known as pangas, Mack said. Usually 19 to 28 feet in length, smugglers will load them up with illegal immigrants to the point the vessels become dangerous.

There's another danger, she said.

"We've noticed that violent tactics have increased, particularly in the water," Mack said. "We've seen an increase in the type of violent tactics these smuggling groups are using. That's a clear sign of desperation."

Tuesday's incident at San Ysidro left thousands of cars stopped on the road for hours when U.S. authorities closed all 24 northbound lanes into the country. The five southbound lanes into Mexico remained open.

Witnesses described a chaotic scene with officers yelling at the vans as they sped away and then drawing their weapons and firing.

"I was crossing the bridge, and I started hearing all this gunfire," Michael Casilla told CNN affiliate XETV. "I saw a couple officers shooting at the van, and I saw a couple of lights fly out. A couple tried to run out (of a van) and they got swarmed by all the Customs agents."

Another motorist might have been too close for comfort.

"This officer was yelling at this blue van that was heading north," the unidentified witness told CNN affiliate KGTV. "He had his gun in his hand, obviously. He yelled at them and they didn't stop. I heard two or three gunshots and at that point in time, I went to the floor."

Border officials opened up eight lanes a couple of hours after the incident, Decima said. But it took a few more hours for all lanes to be opened.