(CNN) -- A series of spooky lights above parts of the northeastern United States Saturday sparked a flurry of phone calls to authorities and television news stations. 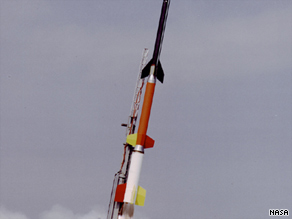 NASA said strange lights seen in the Northeast on Saturday were caused by an experimental rocket.

CNN affiliate stations from New Jersey to Massachusetts heard from dozens of callers who reported that the lights appeared as a cone shape shining down from the sky.

However, the lights were the result of an experimental rocket launch by NASA from the agency's Wallops Flight Facility in Virginia, a spokesman told CNN.

Keith Koehler said the Black Brant XII Suborbital Sounding Rocket was launched to study the Earth's highest clouds. The light came from an artificial noctilucent cloud formed by the exhaust particles of the rocket's fourth stage about 173 miles high.

Natural noctilucent clouds, also called "polar mesospheric clouds," are "found in the upper atmosphere as spectacular displays that are most easily seen just after sunset," according to a NASA statement published earlier in September. "The clouds are the highest clouds in Earth's atmosphere, located in the mesosphere around 50 miles altitude."

Normally, noctilucent clouds are not visible to the naked eye and can only be seen when illuminated by sunlight below the horizon. The launch took place at 7:46 p.m. Saturday, just as the sun was setting for the day.

Observation stations on the ground and in satellites will track the artificial noctilucent clouds created by the rocket for months, NASA said.

"Data collected during the experiment will provide insight into the formation, evolution, and properties of noctilucent clouds, which are typically observed naturally at high latitudes.

"In addition to the understanding of noctilucent clouds, scientists will use the experiment to validate and develop simulation models that predict the distribution of dust particles from rocket motors in the upper atmosphere," the NASA statement said.