LOS ANGELES, California (CNN) -- Gertrude Baines, the world's oldest person, has died in Los Angeles, California, at the age of 115, according to the home where she lived and Guinness World Records said Saturday. 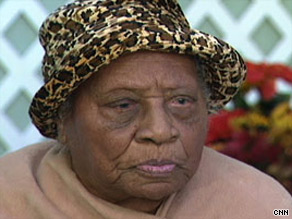 Gertrude Baines said she attributed her longevity to not drinking or smoking.

Born in 1894, Baines became the world's oldest person in January after the death of another 115-year-old, Maria de Jesus, from Portugal, Guinness World Records said.

At her 115th birthday party in April, Baines shook her head in disbelief when presented with the certificate saying she was now in the Guinness Book of World Records as the world's oldest person.

"She told me that she owes her longevity to the Lord, that she never did drink, never did smoke, and she never did fool around," her doctor, Dr. Charles Witt, said in April.

Baines, whose grandparents were slaves, worked as a maid in Ohio State University dormitories until her retirement, and lived at the Los Angeles convalescent home for more than 10 years.

Last November, she became the oldest African-American to vote for President Obama and received a letter from him on her 115th birthday, Guinness World Records said. Witt said Baines planned to vote for Obama again in 2012.

Asked why she voted for Obama, Baines said it was because "he's for the colored people," according to footage from The Los Angeles Times. She said she never thought a black man could become president.

"Everybody's glad for a colored man to be in there sometime," Baines said. "We all are the same on the skin. It's dark, and theirs is white."

Baines had few complaints, her doctor said. She fussed about the bacon not being crisp enough and the arthritis in her knees, Witt said.

The smooth skin on Baines' face belied her 115 years, but she didn't attribute that to any anti-wrinkle cream or miracle product, according to her best friend, Lucille Fayall. She said Baines simply washed her face in cold water.

All About Aging and the Elderly • Guinness World Records Ltd.