LOS ANGELES, California (CNN) -- Los Angeles firefighters and city crews worked for several hours Tuesday to rescue one of their own: a 22-ton firetruck that was nearly swallowed by a water-logged sinkhole. 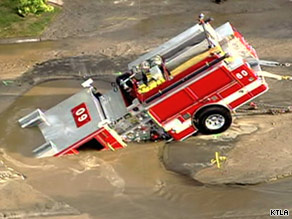 Two firefighters crawled out of the truck's windows after it sank Tuesday morning. No one was injured.

The incident happened after four firefighters took the truck to the San Fernando Valley neighborhood of Valley Village, where flooding had been reported after a water main break, just before 6 a.m. PT.

After seeing running water in the road, a fire captain instructed the rig's driver to back up and had two firefighters get out of the truck to direct it.

That's when the ground gave way and the front of the truck began quickly sinking. The driver and captain crawled out of the truck's windows to escape. The four firefighters were not injured.

Workers had to simultaneously pull and lift the truck to get it out of the sinkhole. Watch workers pull truck from sinkhole