(CNN) -- Whoever said names will never hurt you was wrong, according to a new study. 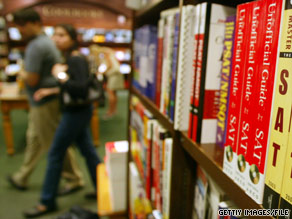 A new study suggests exposure to verbal put-downs from peers can make it harder for good students to achieve.

The study from the University of Illinois suggests dealing with classmate put-downs can make it harder for good students to learn and make it more difficult for students who are behind to catch up.

The first-of-its-kind study cited a national sample of data from the U.S. Department of Education on more than 10,000 high-school sophomores in more than 650 U.S. high schools. One in five respondents claimed they were often "put down" verbally by their peers in school.

"I think it's sort of a wake-up call for a lot of us that this kind of verbal harassment is going on in schools, and it's contributing to a learning environment that is quite disruptive for kids," said Christy Lleras, a University of Illinois assistant professor of human and community development, who worked on the study.

It's not only an issue at public schools. Lleras said the research shows these put-downs are just as big a problem in private high schools as well.

Referring to private schools, Lleras said, "They were certainly doing a good job at making their kids feel safe, but they were not insulating them from emotional harm."

Results of the study indicate boys are likely to experience these put-downs more often than girls, especially at private schools.

The university's study also measured the issue among racial and academic lines. African-American high school students who considered themselves very good students were shown to be more likely to be the victims of verbal abuse from their peers.

Lleras believes the put-downs are a way of coping for students when they are struggling to do their classwork. Regardless of the reason, she thinks it's time schools did something about it.

"A lot of time we've been focusing on physical abuse -- bullying," said Lleras. "However, if one in five kids (is) experiencing this ... this is something that's become an everyday culture among our adolescents. I think knowing that, schools are going to have starting to address it."

The study appears in the Journal of School Violence.

All About High School Education • U.S. Department of Education