Survey: Worst of recession has yet to hit U.S. cities' coffers

WASHINGTON (CNN) -- The light at the end of the recession tunnel is distant and dim for the nation's cities, according to a survey by the National League of Cities. 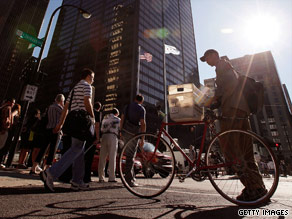 A survey by the National League of Cities finds the financial picture bleak for many U.S. cities.

While optimistic federal officials hint at an economic turnaround, city finance officers say the picture remains bleak for city governments. This is chiefly because a top source of municipal income -- property tax revenue -- tends to lag behind changes in the market.

Because cities typically phase in property tax assessments, the full weight of declining real estate values in the past two years will not be felt by cities until 2010, 2011 and 2012, city officials say.

The takeaway: Residents can expect cities to continue to cut municipal work forces, services and construction projects, while bumping up taxes and fees, experts say.

Cities are still "on the front end" of the recession, said Christopher Hoene, who co-authored the National League of Cities study with Michael Pagano. "Things are likely to worsen before they improve."

The dismal financial picture is the largely the result of declines in all three major areas of municipal revenue -- property taxes, sales taxes and income taxes.

Property-tax collections actually increased 6.9 percent (or 6.2 percent when adjusted for inflation) in 2008 as assessments caught up with previous growth in the real estate market. And revenues are projected to grow 1.7 percent (or 1.6 percent adjusted) this year.

But city finance officers project a drop in the next three years as declining property values are reflected in property tax rolls.

"I think we have one more year of rough time -- and that's attributable to the (revenue) lag," said Lee Feldman, city manager of Palm Bay, a mostly blue-collar town of about 100,000 people on Florida's Space Coast.

Feldman said the city's property tax assessments declined about 22 percent this year and 13 percent last year. The city has responded by proposing a tax increase to keep revenues flat, and by consolidating services such as building inspections and fire inspections. The hardest change, though, has been cutting about 65 jobs from the city's 900-person work force over the past three years, Feldman said.

Though some jobs have been cut through attrition, he said, "we have had to let some folks go."

"We're at the point where it is worsening. But I think our fiscal approach has made us a very stable community," Feldman said. "We're not closing parks; we're not closing facilities down."

Unlike many cities, Palm Bay has not opted for one method of raising money -- increasing fees for such things as parks and recreation. Some 45 percent of cities have raised fees to help balance budgets. Fee increases are so popular, they led to a NYTimes.com headline: "What's Next, Sidewalk Tolls?"

Feldman said he thinks fee increases can result in declining use of services, decreasing city income instead of increasing it.

The National League of Cities says cities are also using reserves -- money carried from one year to the next -- to balance their budgets. But that comes at a cost.

Bond underwriters see reserves as an indicator of fiscal responsibility, the report says. And when reserves decline, the cost of debt increases, putting additional financial burden on the city.

"That's a slippery slope that's hard to get out of," said Feldman, who said he hopes he doesn't have to reach into his city's reserves before the economy turns around.

The National League of Cities survey was conducted from April to June. Surveys were mailed to a sample of 1,055 cities, of which 379 responded, a rate the league says allows it to generalize about all cities with populations of 10,000 or more.

All About National League of Cities • U.S. National Economy