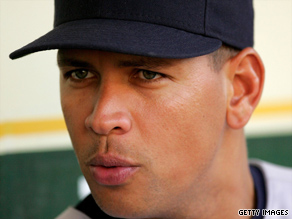 Alex Rodriguez has admitted using a "banned substance" during the 2001-2003 seasons.

The decision recommended new guidelines for computer searches to prevent investigators from using information about people who are not named in a search warrant but whose private data is stored on a computer being searched.

Investigators looking into steroid use by professional baseball players obtained search warrants and subpoenas for the drug tests results on 10 major league players, but they took the results on 104 players.

The Major League Baseball Players Association sued for the return of the seized results, while the government argued investigators should be able to use them since they were "in plain sight" along with the other results during the search.

The appeals court's decision says such a standard for computer searches would be dangerous to everyone's privacy as protected by the Constitution's Fourth Amendment.

"Seizure of, for example, Google's e-mail servers to look for a few incriminating messages could jeopardize the privacy of millions," wrote the 9th U.S. Circuit Court of Appeals judges.

The judges noted that "some players appear to have already suffered this very harm as a result of the government's seizure."

The decision referred to news reports published earlier this summer that quoted "lawyers with knowledge of the results" saying that players Sammy Sosa, Manny Ramirez, Alex Rodriguez and David Ortiz were among those testing positive for performance-enhancing drugs. Rodriguez has admitted using a "banned substance" during the 2001-2003 seasons.

The tests were conducted in 2003 under a collective bargaining agreement between Major League Baseball and the players' union.

"Urine samples were to be collected during the first year of the agreement and each sample was to be tested for banned substances," the court said. "The players were assured that the results would remain anonymous and confidential; the purpose of the testing was solely to determine whether more than five percent of players tested positive, in which case there would be additional testing in future seasons."

The test results were taken in 2004 during searches in California and Nevada of Comprehensive Drug Testing -- the company that kept the results -- and another company that stored the urine samples.