(CNN) -- Michigan's Supreme Court issued an order Tuesday allowing lower state courts to "exercise reasonable control" over the appearance of witnesses and parties, a rule change proposed after a Muslim woman refused to remove an Islamic garment in a small claims court. 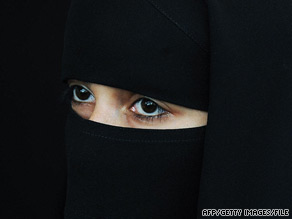 A niqab is a garment that covers the entire face and head, except for the eyes.

The order allows courts "reasonable control over the appearance of parties and witnesses" so as to "ensure that the demeanor of such persons may be observed and assessed by the fact-finder and ensure the accurate identification of such person."

The order, which amends a rule of the Michigan Rules of Evidence, is effective September 1.

The amendment was prompted by a 2006 small claims case in Michigan filed by Ginnah Muhammad, who wore a niqab -- a garment that covers the entire face and head, except for the eyes -- to court, the order said.

According to the Detroit Free Press, Muhammad was contesting a $2,750 repair bill from a car rental company because she said thieves broke into the vehicle she was using.

As she prepared to testify, Judge Paul Paruk asked her to remove her niqab, saying he needed to be able to see her face to tell whether she was telling the truth, according to court documents.

"I can't see certain things about your demeanor and temperament that I need to see in a court of law," Paruk said at the time.

Muhammad refused, saying that she was a practicing Muslim and would take off the veil only in front of a female judge.

Paruk said a female judge was not available and told Muhammad she could remove the niqab or have her case dismissed -- she chose the latter, according to court documents.

She sued the judge in federal district court, which declined to exercise jurisdiction over the case. Muhammad has since appealed to the 6th Circuit Court of Appeals.

The Michigan chapter of the Council on American-Islamic Relations issued a statement saying that if the amended rule was interpreted broadly, it could "not only adversely affect Muslim females who wear the head scarf, but could also be used to violate Jewish, Sikh, and other people of faiths' constitutional rights under the First Amendment while in Michigan courts."

It added, "As a civil rights advocacy group, CAIR-MI is concerned about individuals who may be reluctant to report crimes or petition the courts out of fear that their religious rights may be violated."

Other religious groups, as well as the American Civil Liberties Union and domestic violence groups, had opposed the rule change, the Detroit Free Press reported. The ACLU had asked that the court add a sentence to the rule saying "that no person shall be precluded from testifying on the basis of clothing worn because of a sincerely held belief," the newspaper reported in May.

CAIR also said that it would announce on Wednesday the filing of a federal lawsuit against a Wayne County, Michigan, judge who had asked a Muslim woman to remove her head scarf in court.

"The Muslim plaintiff felt so intimidated by the judge's repeated demand that she eventually removed her head scarf," the organization said in a statement released Tuesday.

CAIR-MI is a co-plaintiff in the lawsuit being filed on behalf of the Michigan woman, who is a member of the group.