(CNN) -- Jesse Ray Beard said he was constantly in trouble, even when he behaved. It took being accused of the racially charged attempted murder of a white classmate in the Deep South to turn his life around. 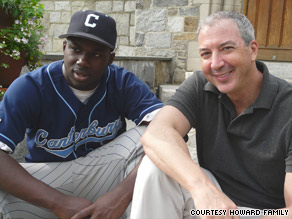 Beard, 18, now interns at a New York law firm as he prepares for his senior year next month at Canterbury School, a Connecticut prep academy where Beard is highly regarded among peers and teachers.

"I didn't change the way I act. I didn't do nothing different. It was just that I was at Canterbury instead of Jena," he said. "It was like Jena was out to get me -- and not just me, but other people, too."

If not for the controversy surrounding the Jena Six and the palpable racial tension in the Louisiana town, Beard never would have met the attorney who changed the course of Beard's life by removing him from everything he knew.

Alan Howard met Beard, the youngest of the African-American teens who made up the Jena Six, in January 2008 when he began representing him in a lawsuit filed by beating victim Justin Barker.

The fight followed months of disquiet among Jena High School students, including off-campus skirmishes, a school arson and nooses hung from a campus tree.

In September 2007, thousands of protesters, alleging the teens were treated harshly because they were black, converged on middle Louisiana.

Protesters were particularly angered at the jailing of Mychal Bell, one of the six, who was charged as an adult. Later in September, he was reclassified as a juvenile and released.

The Jena Six were lionized and vilified; donations for their defense poured in, as did threats on their lives.

Howard said his first impression of Beard -- that he had "tremendous character, tremendous resilience and tremendous potential" -- was so strong he invited the teen to live with his family in New England.

It's been a tidal shift, Beard said, moving from a Louisiana town of 3,000 to Bedford, New York, a well-to-do city of 18,000 situated an hour north of the Big Apple.

The biggest shock? "Where I'm from in Jena, I think the only time it snowed is when I was 6, and it was like 1 inch."

Another difference, he said, is not living in a town where everyone associates him with one of the most controversial events in contemporary race relations.

The Howards say Beard meshes seamlessly. Though he struggled with the curriculum at Canterbury -- a Catholic school in New Milford boasting a six-to-one student-teacher ratio -- he is seeing tutors and showing improvements.

He spent the summer helping attorneys at Howard's firm prepare for court cases and looks forward to his senior year as a three-sport athlete.

Beard is a candidate for team captain, Parson said, and the coach hopes Beard's leadership and "quiet confidence" will draw recruiters from Division I schools. Division II schools are already snooping around, he said.

"When he gets going, he's like a freight train. He's also got the softest pair of hands you could ever imagine on a high school football player and can make moves in the field like Barry Sanders," Parson said, invoking the Detroit Lions' legendary running back.

Other fresh experiences include snowboarding in Utah, surfing in Long Island, visiting the Hamptons and attending baseball games at Fenway Park and Yankee Stadium.

Beard is prone to the same gaffes as any teenager, Jessie said, giggling as she recalled a time he replaced a box of snacks in the cabinet after finishing the last one. Her mother, Patti, left the box on his sneakers with a note: "Would you like more of these?"

"He's just another member of the family," Jessie said. "Now, when people ask me how many brothers I have, I say three, not two."

Beard said he could never be proud of his involvement with the Jena Six, but he believes God put him through tribulations to deliver him to a better place.

"I'm not glad it happened, but I'm glad I came to a good family," he said.

Beard's mother, Stella, is a "remarkable woman," Howard said, but Beard didn't have much supervision at home. Howard thought to himself in 2008, "It's not just enough to keep the kid out of jail one time because the system is stacked against him."

Five of the Jena Six had already made tracks -- to Texas, to Georgia, to other parts of Louisiana -- but Beard had nowhere to go. That he was on house arrest for another juvenile offense confounded matters.

"I promise you I will get you out of Jena, whatever it takes," Howard told Beard. "You promise me that you'll hang in there, keep doing what you're doing, going to school and keep out of trouble."

Beard's mother made "the ultimate sacrifice," allowing Howard to pursue guardianship and ferry her son 1,500 miles to New England. She put aside Jena Six donations to help Howard pay Canterbury's $40,000-a-year tuition, he said. She declined to be interviewed.

Beard left Jena in spring 2008. About a year later, Beard, Robert Bailey, Theo Shaw, Carwin Jones and Bryant Purvis pleaded no contest to misdemeanor battery. Fines and probation were doled out and civil suits settled. The terms were undisclosed.

Bell, who served as the face -- and lightning rod -- of the Jena Six, had separately pleaded guilty to a second-degree battery charge in December 2007.

Weeks after completing his 18-month sentence at a juvenile facility, Bell shot himself in the chest in December after an arrest on shoplifting charges. He later said the pressure to be perfect prompted him to pull the trigger. Read Bell's remarks after the suicide try

Jena is often painted as a town of bumpkins who pursued draconian criminal charges and exorbitant bails for a school fight but turned a blind eye when three nooses dangled from a campus tree.

Beard, however, bristles at the portrait and defends his hometown.

"No, sir. There's not more racists in Jena," he said. "There's racism everywhere. I just can't blame it on Jena because I did get along with the white folks and they did like me."

As he and his five cohorts pursue educational and athletic endeavors around the nation, Beard hopes they won't be dogged by racial matters but that they'll be "superstars, not from being the Jena Six, but from whatever we go to college for."

Howard and Parson have confidence Beard will succeed, no matter his occupation.

"Whatever he ends up doing," the coach said, "he's going to be great."