WASHINGTON (CNN) -- FBI Director Robert Mueller harshly criticized the decision to release the Lockerbie bomber in a letter released Saturday, calling it "a mockery of the rule of law." 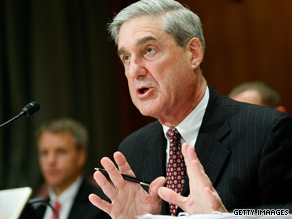 FBI Director Rober Mueller called the release "detrimental to the cause of justice."

Mueller, in a note to Scottish Justice Secretary Kenny MacAskill, said MacAskill's decision to release Abdelbeset Ali Mohmed al Megrahi is "as inexplicable as it is detrimental to the cause of justice."

Al Megrahi had been serving a life sentence for the 1988 bombing of Pan Am Flight 103 over Lockerbie, Scotland, in which 270 people, including 189 Americans, were killed.

MacAskill freed him after doctors concluded he has terminal prostate cancer and estimated he has three months to live.

In explaining his decision to release al Megrahi, MacAskill said that Scotland's "justice system demands that judgment be imposed but compassion [be] available. Our beliefs dictate that justice be served but mercy be shown."

Al Megrahi received a jubilant welcome on his return to Libya, where a flag-waving crowd cheered and honked horns.

"Your action rewards a terrorist ... (and) makes a mockery of the emotions, passions and pathos of all those affected by the Lockerbie tragedy," Mueller wrote.

"But most importantly, your action makes a mockery of the grief of the families who lost their own ... You could not have spent much time with the families, certainly not as much time as others involved in the investigation and prosecution."

Mueller told MacAskill he typically doesn't comment on the actions of other prosecutors, but that he made an exception in this instance because he headed the investigation and indictment of Megrahi as an assistant attorney general in 1991.

"You apparently made this decision without regard to the views of your partners in the investigation and prosecution of those responsible for the Lockerbie tragedy," Mueller wrote. "You have given the family members of those who died continued grief and frustration. ... Where, I ask, is the justice?"

Al Megrahi has always maintained his innocence, complaining that he had spent years in prison for something he did not do.

The Libyan government had accepted responsibility for the bombing and compensated victims' families in a $2.7 billion deal that paved the way for sanctions against Libya to be dropped and for Tripoli to improve ties with the West.

But Thursday, after al Megrahi's return, the Libyan official news agency JANA issued a statement from the government saying that al Megrahi had been "a political hostage," as evidenced by his release.