WASHINGTON (CNN) -- An independent research group predicts that cyberwarfare will accompany future military conflicts and is recommending international action to blunt its impact. 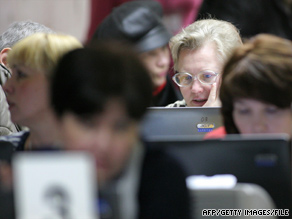 The nonprofit U.S. Cyber Consequences Unit studied the cybertactics used against the country of Georgia during its military conflict with Russia last year. Cyberattacks in August 2008 shut down the Web sites of crucial Georgian government agencies, the media and banks.

"The Russians have developed a model here that is very effective," said Scott Borg, director of US-CCU. "We can expect to see the Russians use it in the future, and other countries as well."

Because of the sensitive nature of much of the information, the full 100-page report is being released only to U.S. government officials and selected cybersecurity professionals. CNN was provided a nine-page summary.

The study concludes that the cyberattacks against Georgian targets were carried out by civilians, many of them recruited via social networking forums devoted to dating, hobbies and politics.

As a result, Borg said, Russian sympathizers who were not hackers, and who didn't even know much about computers, could participate.

The report says the civilian cyberattackers were aided and supported by Russian organized crime. Although they found no evidence of direct involvement by the Russian government or military, the report concludes that the organizers were tipped off about the timing of Russian military operations.

The report says that "the necessary reconnaissance and the writing of attack scripts had to have been done in advance ... and suggests that cyber attacks against Georgia had been on the Russian agenda for some time."

The hackers did not carry out physically destructive cyberattacks, although they probably had the technical expertise to do so, suggesting that "someone on the Russian side was exercising considerable restraint," the report says.

It also notes that media and communications facilities, which might have been attacked by missiles and bombs in a conventional war, were spared that, "presumably because they were being effectively shut down by cyberattacks."

Because the cybercampaign against Georgia presents a pattern that can be expected in future conflicts, the report says, there is an "urgent need" for an international organization to provide risk advisories when preparations for a cybercampaign are detected.

It also says there should be an international cyber-response force to provide quick assistance to member countries, advising them on how to thwart an attack and setting up operations to do so.

The report also recommends that every country conduct cyber-response exercises, otherwise "the relevant officials will waste precious time trying to figure out whom they should be contacting and what they should be doing."

Bumgarner said that cyberwarfare "is a global chess game in which citizens, governments and corporations are the pawns."

Borg added, "Right now, the international community has no idea how to deal with this."

All About Russia • Republic of Georgia • Internet