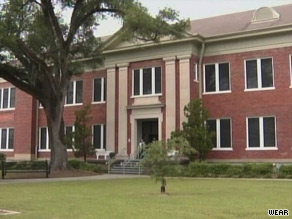 They face a non-jury trial September 17 before U.S. District Judge Casey Rodgers. The statute under which they are charged carries a maximum penalty of up to six months in prison, subject to sentencing guidelines.

Attorneys defending Lay and Freeman call it outrageous that the two are being prosecuted for "a simple prayer." But the American Civil Liberties Union, whose lawsuit led to the consent decree, maintains that students have a right to be free from administrators foisting their religious beliefs on them.

Still, an ACLU representative said the organization never suggested that people should go to jail for violating the decree.

Watch why lawyer thinks men did nothing wrong »

The ACLU filed suit last year against the district on behalf of two Pace students who alleged that "school officials regularly promoted religion and led prayers at school events," according to an ACLU statement.

Both parties approved the consent decree put in place January 9, under which district and school officials are "permanently prohibited from promoting, advancing, endorsing, participating in or causing prayers during or in conjunction with school events," the ACLU said.

Lay was a party in the initial lawsuit, and his attorney was among those approving the consent decree, according to the organization. In addition, the court required that all district employees receive a copy.

On January 28, "Lay asked Freeman to offer a prayer of blessing during a school-day luncheon for the dedication of a new fieldhouse at Pace High School," according to court documents. "Freeman complied with the request and offered the prayer at the event. It appears this was a school-sponsored event attended by students, faculty and community members."

Attorneys from Liberty Counsel, a conservative legal group helping defend Lay and Freeman, said in a written statement that attendees included booster club members and other adults who helped the field house project, all "consenting adults."

In a February 4 letter to district Superintendent Tim Wyrosdick in which Lay acknowledged the incident, he said that although past football booster club members "and other adults associated with the school system" were at the luncheon, culinary class students were in charge of food preparation and serving.

Lay wrote that he asked Freeman to bless the food "for the adults. ... I take full responsibility for this action. My actions were overt and not meant to circumvent any court order or constitutional mandate."

In response, Wyrosdick noted in a letter to Lay that in a meeting, the principal had admitted that "you are, and were at the date of this incident, aware of the court injunction and aware that this type of action is not permissible under the injunction."

Wyrosdick recounted telling Lay that the prayer was not appropriate.

"This note is to share with you written instructions to avoid this type of action," the superintendent said. Both letters are in the public court file.

"It is a sad day in America when school officials are criminally prosecuted for a prayer over a meal," said Mathew Staver, founder of Liberty Counsel and dean of the law school at Liberty University, founded by the late Rev. Jerry Falwell. "It is outrageous and an offense to the First Amendment to punish a school official for a simple prayer."

Liberty Counsel said it is challenging the consent decree, maintaining that it "unconstitutionally infringes on the rights of teachers, administrators and students."

The ACLU, according to the Liberty Counsel statement, has begun "to go against individual employees." The organization said that neither man "willfully violated any orders of the court."

"We're not going after individuals," said Glenn Katon, director of the Religious Freedom Project for the ACLU of Florida. "We're just trying to make sure that school employees comply with the court order."

The ACLU did not request the criminal contempt charges against Lay and Freeman, he said; the judge initiated them after seeing a reference to the incident in a motion. And the ACLU is not involved in the criminal proceedings, he said.

"We certainly never suggested that anyone go to jail," Katon said.

Lay is not facing jail time for praying, he said, but for violating a court order.

Neither Lay nor Freeman has been placed on leave, according to the school district.

Pace is about 10 miles north of Pensacola, Florida.