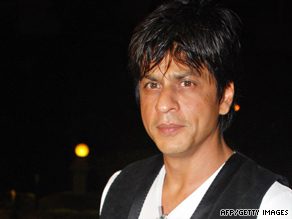 In an interview with CNN's sister network in India, CNN-IBN, Khan said immigration officials at the airport detained him for questioning after they said his name was flagged.

"They kept on telling me that my name is common to some name that has popped up on the computer, so they need to follow procedure," he said. "It took them an hour and a half, two hours; they kept on asking me questions, if I could give them any ... numbers in America that they can contact and vouch for me and who I am."

A U.S. Customs and Border Protection spokesman said the agency could not comment on specific incidents.

"I was really taken aback because there were people who knew me there," Khan told CNN-IBN, referring to other travelers who were nearby.

Rajeev Shukla, the secretary of India's ruling Congress party and a friend of Khan's, told CNN that the actor called him from Newark, as well as Khan's secretary and family.

Shukla said Khan, who was en route to Chicago, Illinois, was allowed to leave after Indian Embassy officials intervened.

In New Delhi, India, U.S. Ambassador Timothy Roemer issued a statement describing Khan as a "very welcome guest" in the United States and a "global icon."

"Many Americans love his films," Roemer said. "We are trying to ascertain the facts of the case -- to understand what took place."

The Indian government said in a written statement that it understood that Khan had been "taken aside for 'secondary questioning'" at Newark airport.

"The consulate general of India got in touch with him immediately upon learning about the incident," the statement said. "Mr. Khan said that he was all right. The consulate offered him any assistance that he may require."

The government said it has taken up the matter with the U.S. Embassy in New Delhi.

All About India • Movies • Tim Roemer