(CNN) -- The Philadelphia Eagles welcomed Michael Vick back into the National Football League on Friday after the quarterback spent almost two years in federal prison on a felony dogfighting conviction. 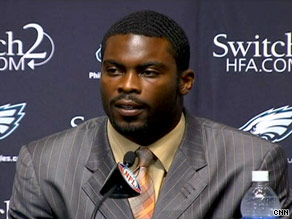 Vick, formerly with the Atlanta Falcons, has signed a two-year deal with the Eagles.

"I think everybody deserves a second chance," Vick said at a news conference in Philadelphia, Pennsylvania, on Friday. "Now I want to be part of the solution and not the problem."

Vick, 29, was freed from federal prison at Leavenworth, Kansas, on May 20 and returned to his Virginia home to serve the last two months of his 23-month sentence in home confinement. iReport.com: Is this a good move?

"Everything that happened at that point in my life was wrong," Vick said of his involvement with the dogfighting ring.

"I had to reach a turning point. Prison definitely did it for me," he said.

Flanked by Eagles coach Andy Reid and former NFL coach Tony Dungy, who acted as a mentor to Vick after he was imprisoned, the newest Eagle vowed "to do all the right things."

"I want to be an ambassador to the NFL and the community," he said. "I'm glad I got ... a second chance. I won't disappoint."

Dungy said that he thinks Vick can revive his career and turn his life around in Philadelphia but that the quarterback will be tested by fickle Eagles fans.

"He is gonna have a lot of people who do not think he should be playing. He's got to prove them wrong on the field and off the field," Dungy said.

Watch why Dungy thinks Vick will be a positive force »

The Pennsylvania Society for the Prevention of Cruelty to Animals said Thursday night in a statement that it was "incredibly disappointed" at the news.

"Philadelphia is a city of dog lovers and, most particularly, pit bull lovers," said Susan Cosby, the organization's chief executive officer. "To root for someone who participated in the hanging, drowning, electrocution and shooting of dogs will be impossible for many, no matter how much we would all like to see the Eagles go all the way."

However, Ed Sayres, president and CEO of the American Society for the Prevention of Cruelty to Animals, said in a statement that "[NFL] Commissioner Roger Goodell and the Philadelphia Eagles have granted Michael Vick a second chance, and the ASPCA expects Mr. Vick to express remorse for his actions, as well as display more compassion and sound judgment this time around than he did during his previous tenure with the NFL.

Reid said he knows that there are some fans who will not accept Vick.

It is unclear what role Vick will play in the Eagles' offense. But it was clear that the move had the blessing of Eagles starting quarterback Donovan McNabb.

The NFL reinstated Vick on a conditional basis last month. Vick "will be considered for full reinstatement and to play in regular-season games by Week 6 based on the progress he makes in his transition plan," the league said in a statement last month.

Court documents released in Vick's case showed that two of his co-defendants, who also pleaded guilty as part of a plea deal, said that Vick helped kill dogs that didn't fight well and that all three men "executed approximately eight dogs" in ways that included hanging and drowning. The dogs were killed because they fared poorly in "testing" sessions held at Vick's property.