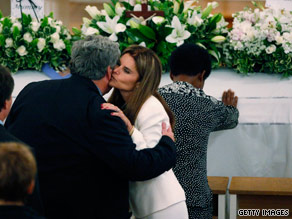 Shriver, a champion of the disabled who founded the Special Olympics, died Tuesday at age 88.

Before the service began, Special Olympians carried the Special Olympics torch into the church, a family statement said. They took part in a procession toward the church, followed by the hearse and the Shriver family walking behind.

The funeral follows a public wake and prayer service that was held Thursday at Our Lady of Victory Roman Catholic Church in Centerville, Massachusetts.

Details about her private burial will not released until after Shriver is laid to rest.

Born on July 10, 1921, in Brookline, Massachusetts, Shriver was the fifth of nine children of Joseph P. and Rose Fitzgerald Kennedy.

She emerged from the long shadow of siblings John Kennedy, Robert Kennedy and Sen. Edward Kennedy as the founder of the Special Olympics, which started as a summer day camp in her backyard in 1962.

"Eunice is now with God in heaven. My sister Jean and I, and our entire family, will miss her with all our hearts," Edward Kennedy, who is battling brain cancer, said on his Web site. "I know that our parents and brothers and sisters who have gone before are filled with joy to have her by their side again."

She is survived by her husband, R. Sargent Shriver Jr., who ran President Lyndon Johnson's War on Poverty in the 1960s and was Democrat George McGovern's running mate in the 1972 presidential election.