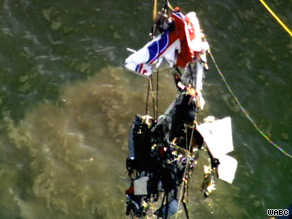 The wreckage of a plane that collided with a helicopter is lifted this week from the Hudson River.

A controller at New Jersey's Teterboro Airport handling the flight of a Piper airplane carrying three people "was involved in apparently inappropriate conversations on the telephone at the time of the accident," FAA spokeswoman Laura Brown said in a statement Thursday.

A source with knowledge of the investigation said the controller was on the phone with his girlfriend "after he cleared the pilot for takeoff; he was still on the phone at the time of the crash."

In addition, "the supervisor was not present in the building as required," Brown said.

"While we have no reason to believe at this time that these actions contributed to the accident, this kind of conduct is unacceptable, and we have placed the employees on administrative leave and have begun disciplinary proceedings," she said.

Watch amateur video of the moment of impact »

"These are serious violations of the FAA regulations," said Mary Schiavo, former inspector general for the Transportation Department.

"We support that any such allegation is fully investigated before there is a rush to judgment about the behavior of any controller," said a statement from the National Air Traffic Controllers Association.

The National Transportation Safety Board is working with the FAA in investigating Saturday's collision of the Piper, which had taken off from Teterboro, with a sightseeing helicopter that was carrying five Italian tourists and a pilot.

No one aboard either aircraft survived the crash.

The NTSB has said the pilot of the small plane was cleared electronically and handed off to Newark, New Jersey, air traffic controllers, a standard procedure.

However, Newark's control tower never got a verbal response from the pilot of the small plane.

The controller put on leave was described as a longtime employee, the source said.

He and the supervisor face disciplinary action that could include their firing.

Pilots are urged to use a radio frequency dedicated to traffic in that corridor, fly no faster than 140 knots and turn on their lights as they enter that airspace.

Babbitt made the comments at an event at the agency's research facility in Atlantic City, New Jersey.

All About Hudson River • U.S. National Transportation Safety Board