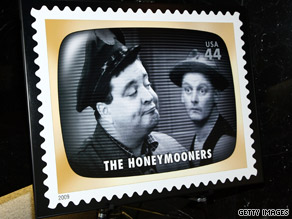 "The Honeymooners" is one of 20 classic TV stamps that will soon find its way on the corner of envelopes.

The classic show appears on one of 20 stamps released this week, featuring 1950s hit television shows.

The first-class stamps include images of "Dragnet," "The Ed Sullivan Show," "The Honeymooners," "I Love Lucy," "Lassie," "The Lone Ranger," "Ozzie and Harriet" and "Perry Mason."

"All of the classic television shows represented on these stamps represent the collective memory of a generation well deserving of entertainment," said James C. Miller III, a Postal Service board member. "It was a generation that survived the Great Depression and fought World War II. They were pioneers -- creative geniuses -- who brought television shows of the 1950s into our homes, breaking new ground to provide entertainment for everyone."

The retro-style stamps, featuring black-and-white images of the shows, were designed by Carl Herrman, an artist from Las Vegas, Nevada.

All About U.S. Postal Service