(CNN) -- The Rancho Bernardo Inn, a San Diego luxury resort, is offering rooms for $19 a night. But there's a catch -- you have to sleep in a tent and bring your own toilet paper. 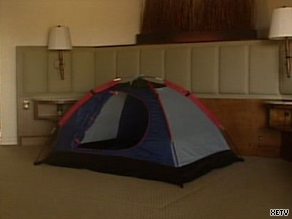 "For $19 a night, a customer gets a shell with a tent inside," says Rancho Bernardo Inn's John Gates.

The declining economy has taken a toll on the Rancho Bernardo, a 200,000 acre luxury resort which has three pools, a golf course, three restaurants and a spa that was named No. 1 by Conde Nast in 2008.

"During a brainstorming session, we were talking about discounts and promotions and wanted to come up with something different than the same promotions and discounts," said Rancho Bernardo general manager John Gates. "We wanted to do something fun and clever. It's a way of making the best of these bad economic times and trying to give customers an experience."

Rancho Bernardo's "Survivor Package" starts at $219 per night, but customers are allowed to customize and pick their price point. Guests can lower the cost by opting to give up breakfast and other luxury items, including toiletries.

"For $19 a night, a customer gets a shell with a tent inside," said Gates. The bed, lighting, bed sheets, towels and toilet paper are all removed. "We ran a similar promotion in June which was very popular. About 100 people took the offer."

Gates said he has received several phone calls, and 50 customers have already booked a reservation at the $19 price. The promotion will run from August 16 to 31.

And don't forget your toilet paper and toothpaste!