Freed journalist: 'We are so happy to be home' 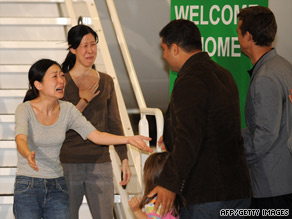 The families of Euna Lee, left, and Laura Ling greet them Wednesday in California.

"We feared at any moment that we could be sent to a hard labor camp, and then suddenly we were told we were going to a meeting," a tearful and emotional Ling said at a news conference Wednesday morning in California shortly after arriving by plane with Lee and Clinton.

She spoke minutes after the two women were reunited with their families at Bob Hope Airport in Burbank outside Los Angeles. They had been detained in North Korea since March.

"We were taken to a location, and when we walked through the doors, we saw standing before us President Bill Clinton," Ling said, with Lee standing beside her.

Watch the emotional return at the airport »

"We were shocked, but we knew instantly in our hearts that the nightmare of our lives was finally coming to an end."

She expressed her and Lee's "deepest gratitude" to Clinton and his "wonderful, amazing" team.

Watch as Ling says, "We could feel your love" »

"The past 140 days have been the most difficult, heart-wrenching time of our lives," Ling said. "We are very grateful that we were granted amnesty by the government of North Korea, and we are so happy to be home."

She said that she and Lee are looking forward to spending "some quiet, private time" with their families. iReport.com: Share reaction to the freed journalists

Former Vice President Al Gore also spoke to the throngs of journalists at the news conference. He expressed his gratitude to Clinton and President Obama and his administration who "have been deeply involved in this humanitarian effort."

Watch Gore pay tribute to the people involved in the effort »

Lee and Ling are employed by Gore's California-based media company, Current TV. The women were arrested in March while reporting from the border between North Korea and China. In June, they were sentenced to 12 years of hard labor on charges of entering the country illegally to conduct a smear campaign.

On Wednesday morning, Lee bowed as she walked down the steps of the plane into a private hangar, and Ling raised her fists into the air. The women hugged their families, who were waiting at the bottom of the stairs. Lee's 4-year-old daughter, Hana, clung tightly to her tearful mother.

Watch as the women reunite with their families »

Clinton walked off the plane minutes later but did not address the crowd.

"I am very happy that after this long ordeal, Laura Ling and Euna Lee are now home and reunited with their loved ones," Clinton said in a statement.

"When their families, Vice President Gore and the White House asked that I undertake this humanitarian mission, I agreed. I share a deep sense of relief with Laura and Euna and their families that they are safely home."

Journalist Lisa Ling said she never gave up hope that she would see her sister again.

"We always maintained our hope and knew in our hearts that we would see Laura again; we just didn't know when," Lisa Ling said outside her home in Los Angeles, California. "We are just thrilled beyond words that the day has finally arrived."

She said her sister was looking forward to eating fresh fruit and food for the first time in four months, after many meals of rice that often contained rocks.

"I can tell she has gone through a lot," Ling said.

"My sister has an amazing, amazing spirit, and she's a little bit weak right now, so I think it's going take a little time for her to gather up her wits and be able to talk about what she experienced."

At the White House, Obama applauded the release of the two journalists, saying, "We are very pleased with the outcome."

Their release is a "source of happiness not only for the families but for the entire country," he said.

Watch as Obama says, "We are relieved" »

Obama also thanked the former president and Gore for their roles in winning the women's release.

"I think that not only is this White House ... extraordinarily happy, but all Americans should be grateful to both former President Clinton and Vice President Gore for their extraordinary work," he said.

Clinton made the trip to North Korea after the women's families asked him to travel there, a senior administration official said.

Doug Ling, Ling's father, earlier reacted to the news of his daughter's release outside his home in Carmichael, California, saying it was "one of the best days in my life."

"I figured, sooner or later, they'd be back," he said.

U.S. Secretary of State Hillary Clinton also expressed her relief that the two women were released. She spoke from Nairobi, Kenya, where she is taking part in a multination visit to Africa.

"I spoke to my husband on the airplane, and everything went well," she said. "It is just a good day to be able to see this happen."

In July, Ling and Lee spoke to their families and told them that the North Koreans were willing to grant them amnesty if a high-level envoy, such as former President Clinton, were willing to travel to Pyongyang, the administration official said on condition of anonymity.

North Korea said Clinton "expressed words of sincere apology to Kim Jong Il" for the journalists' actions, but the administration official said he knew nothing about an apology.

He said Clinton met for three hours and 15 minutes with the North Korean leader but said he did not know what issues were discussed. But he said Clinton's views on a verifiable denuclearization of the Korean Peninsula are well-known.

North Korea's state-run Korea Central News Agency said Clinton conveyed a message from Obama "expressing profound thanks for this and reflecting views on ways of improving the relations between the two countries."

But White House spokesman Robert Gibbs said before the announced agreement that Clinton was not carrying any message from Obama.

Gibbs added the former president last spoke with Obama during a White House visit in March. He described Clinton's trip as a "solely private mission to secure the release of two Americans."

Clinton's mission came as the United States and its allies in the region are seeking to persuade North Korea to return to the stalled nuclear disarmament talks.

North Korea conducted its second nuclear bomb test in May and has held several missile tests since then. The United Nations has responded by increasing sanctions on the nation.

North Korea and the United States had no regular contacts before a 1994 crisis over Pyongyang's nuclear program. North Korea agreed then to halt the development of nuclear weapons but abandoned that accord and withdrew from the Nuclear Non-Proliferation Treaty in 2003.

Clinton had considered visiting North Korea in 2000, near the end of his second term as president. His secretary of state, Madeleine Albright, had gone to Pyongyang in 2000 to meet with Kim. She was the last high-ranking American official to do so before this week.