WASHINGTON (CNN) -- The remains of the first American shot down in the 1991 Persian Gulf War have been uncovered, the U.S. Department of Defense announced Sunday. 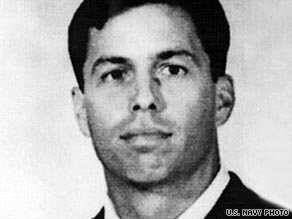 The announcement early Sunday of the discovery of Speicher's remains ends more than 18 years of speculation about whether Speicher may have survived the crash and been held captive, or died in captivity in the ensuing years.

"The news that Captain Speicher's remains have been recovered is a reminder of the selfless service that led him to make the ultimate sacrifice for our freedom," President Obama said in a statement.

"I am grateful to the [U.S.] Marines who pursued the information that led to Captain Speicher's recovery so that he can now come home. My thoughts and prayers are with his family, and I hope that the recovery of his remains will bring them a needed sense of closure," Obama said.

Speicher's family thanked the military in a statement Sunday, saying Speicher "was a brave and wonderful father, husband, and naval officer who responded without hesitation when his country needed him. ... We thank the active duty men and women whose diligence has made this happen, and hope that this process has prevented another of our service men and women from being left behind.

"We will miss him, and will never forget. Thank you for your thoughts and prayers."

An Iraqi civilian told U.S. forces in Iraq in early July about the location of the crash that killed Speicher, according to Navy Secretary Ray Mabus. U.S. Marines in Anbar province went to the site and spoke to another Iraqi who told them he witnessed Bedouins burying Speicher's remains in the desert after the crash, the statement said.

A search uncovered the remains, which were flown to Dover Air Base last week and positively identified as Speicher's by the Armed Forces Institute of Pathology, the statement said.

The remains included bones and skeletal fragments, and positive identification was made by comparing Speicher's dental records with a jawbone recovered at the site, the statement said.

"We send our deepest condolences to the Speicher family for the sacrifice Captain Speicher made in the service of his country," the top U.S. commander in Iraq, Gen. Ray Odierno, said in a statement. "Although we cannot fully understand the sense of loss, or the pain his family has shouldered throughout the years of waiting, we hope they can find solace in his dignified and honorable return home."

Speicher was a lieutenant commander when shot down, but because his status remained uncertain, he received promotions during the past 18 years, reaching the rank of captain.

He was originally listed as "Killed-in-Action/Body-Not-Recovered" in May 1991. That status changed in 2001 to "Missing in Action," and then to "Missing/Captured" in 2002, based on sighting reports in Iraq. Those sightings have since been discredited.

His status was changed back to MIA earlier this year.

"All the evidence that we were getting seemed to suggest that Scott was alive and being held against his will," Nels Jensen of Little Rock, Arkansas, a high school friend of Speicher's, told CNN. "And you know, we never sent out a search and rescue party, and if we had ... none of this mess would probably have been necessary."

In the six years that the United States has been in Iraq for its second war, all of the many leads and alleged sightings of Speicher have been investigated and found to be false.

The Speicher family has worked closely with the Navy to ensure the hunt for him would not stop.

"We reiterate our commitment to find and account for all military members and civilians who have gone missing in the service of our nation," Odierno said in Sunday's statement. "We will not stop until all are found."

All About Iraq War • Persian Gulf