NEW YORK (CNN) -- A man accused of entering New York's LaGuardia Airport with a bag containing wires and batteries, sparking suspicion and leading to a large-scale evacuation, was ordered Saturday to undergo a psychiatric evaluation, a prosecutor said. 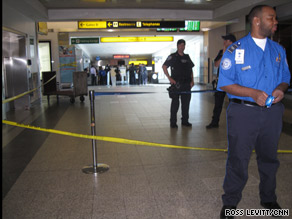 LaGuardia Airport's Central Terminal is being treated as a crime scene.

Scott McGann, 32, appeared in court after authorities said he walked into LaGuardia's Central Terminal Saturday morning with what was determined to be a fake bomb. The terminal was reopened after several hours.

McGann appeared in court Saturday, but his arraignment was postponed, Brown said. McGann is being held without bail.

"The defendant is clearly a very troubled young man," Brown said. "As a result, the Court has directed that he be examined to determine whether he has the capacity to understand the proceedings against him and assist in his defense."

Earlier, officials said McGann wouldn't speak to his lawyer or anyone else. His next court appearance is scheduled for Thursday.

McGann allegedly arrived at a checkpoint in the terminal at about 4:50 a.m., carrying a backpack and refusing to answer security questions. Authorities said the officer at the checkpoint was informed that a suspicious package was attached to the bottom of McGann's backpack, and that McGann allegedly grabbed what appeared to be a trigger device with a red button connected to the backpack.

McGann allegedly pressed the button several times before a Port Authority officer grabbed the trigger and the package away from him.

The package turned out to be a device consisting of batteries, cylinders and electronic components that could have been used to make a bomb, Brown said, but the bomb squad found that it didn't not contain any explosives.

McGann had a ticket on a United Airlines flight to Chicago and a seat on two other connecting flights with his final destination Oakland, California, according to a law enforcement official close to the investigation.

Watch passengers talk about the confusion »

McGann has three prior arrests in the New York area, the source told CNN. The most recent involved June charges of tampering with evidence and resisting arrest. He was also arrested twice in 2008, the source said.

The arresting officers described McGann to Kelly as "extremely disheveled and dirty," in a "near catatonic state" and "staring off into space," Kelly said. McGann had been homeless for at least a year.

Authorities evacuated the terminal after 5:20 a.m., and allowed passengers back in to all areas except Concourse C by midmorning, Kelly said. The concourse was reopened shortly before 11 a.m., according to Federal Aviation Administration spokeswoman Holly Baker.

Authorities had stopped flights from taking off or landing at the airport, but by a little after 9 a.m., flights resumed, Baker said.

Central Terminal is one of four terminals in the airport, which is in the borough of Queens. It is about eight miles from Manhattan.

CNN i-Reporter Jose Ojeda, 24, had been sitting on the tarmac on a plane headed to Chicago, Illinois, when the evacuation was ordered.

"We were all ready to go," Ojeda, of Bronx, New York, said of his flight, which he said had been scheduled to leave at 6:10 a.m.

"They didn't make any announcement other than, 'You need to evacuate,'" he said. "I thought it was standard procedure, but then once we got out of the plane, they kept pushing us back and back, out of the terminal out of the actual airport."