(CNN) -- An additional 440,000 Honda vehicles are being added to a recall initially announced in November to repair a potential defect in airbag inflation systems, American Honda Motor Co. said Friday. 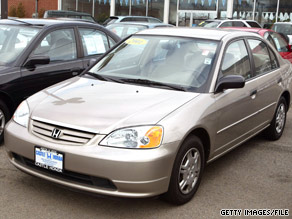 The 2001 Honda Civic is among the vehicles covered by the recall.

The affected vehicles will require the replacement of the steering-wheel-mounted airbag inflator.

"In some vehicles, airbag inflators can produce over-pressurization of the driver's [front] airbag inflator mechanism during airbag deployment," the release said. "If an affected inflator deploys, the increased internal pressure may cause the inflator casing to rupture. Metal fragments could pass through the cloth airbag cushion material, possibly causing an injury or fatality to vehicle occupants."

"Only certain vehicles are affected, and concerned owners of 2001-2002 Accords, 2001 Civics and 2002-2003 Acura TLs are encouraged to wait to receive a recall notice in the mail before scheduling an appointment with their local dealer," the company said.