(CNN) -- Members of the nation's oldest black sorority have accused the organization's president of using her sorority credit card for personal items and its board of directors of spending too much on her. 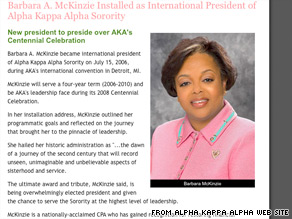 Alpha Kappa Alpha Sorority President Barbara McKinzie denies the claims in the lawsuit against her.

The suit alleges that the Alpha Kappa Alpha Sorority's board of directors signed off on spending hundreds of thousands of dollars on President Barbara McKinzie and commissioned an expensive wax figure of her.

McKinzie denied the allegations, saying they are "without merit."

The most "outlandish representation" in the lawsuit, she said, is the allegation that the sorority spent $900,000 on a wax figure of her.

Two wax figures -- one of McKinzie and one of the sorority's first president, the late Nellie Quander -- were purchased by the hostess chapters of the sorority's centennial convention last year, not the national AKA organization, for a total of $45,000, McKinzie said.

The lawsuit says the sorority's board of directors approved the use of $900,000 for the wax likeness of McKinzie ahead of the centennial celebration.

Edward W. Gray Jr., an attorney representing the plaintiffs, acknowledged that the sorority disputes the lawsuit's account of the statue's price tag.

However, he said, "we have no way of knowing what the actual number was. We hope that it was as little as they say."

He called the alleged conduct "shocking and bordering on illegal."

The wax figures are to appear in the National Great Blacks in Wax museum in Baltimore, Maryland, according to AKA. The museum said they are on a traveling exhibit.

The lawsuit, filed last month in a Washington superior court, also accuses McKinzie of using her sorority credit card for "designer clothing, lingerie, jewelry, gifts and other excessive and inappropriate expenses of a personal nature."

It demands that the sorority fire McKinzie and the board of directors and that the alleged damages be repaid.

The lawsuit says that by using her credit card for personal purchases, as well as for "properly reimbursed expenditures," McKinzie amassed American Express points, which she then redeemed for a 46-inch television and gym equipment.

It also says that the sorority's board of directors had agreed on compensation for McKinzie without the approval of the sorority's policy-making body. The compensation, it says, included a $4,000-a-month stipend that McKinzie is to receive for four years after she leaves office.

The board of directors also voted to buy a $1 million life insurance policy for McKinzie, a purchase that was also not approved by the policy-making body, the lawsuit says.

"Allegations about personal use of AKA funds are false and unsupported by the organization's audited books," she said. The "malicious allegations leveled against AKA by former leaders are based on mischaracterizations and fabrications not befitting our ideals of sisterhood, ethics and service."

The lawsuit also blames McKinzie and Betty James, the executive director for the organization's corporate office, for financial decisions they made for the sorority.

The sorority's claimed deductions on its federal tax returns in 2006 and 2007 were "unreasonably large and inappropriate, thus exposing the sorority to potential IRS claims and obligations," the suit says.

Furthermore, the sorority's policy-making body has not approved McKinzie's investment philosophy, which "has caused the shifting of several million dollars of the sorority and foundation funds from cash and cash equivalents to stock and bond investments."

McKinzie said in her statement that under her leadership, "accounting and budgetary practices have been tightened, erasing past IRS liabilities and cost overruns."

In addition to McKinzie, James and the sorority, the lawsuit names other members of the board of directors and the AKA Educational Advancement Foundation Inc. as defendants.

AKA was founded in 1908 and is based in Chicago, Illinois.