(CNN) -- Nearly two years after he pleaded guilty to a federal charge of bankrolling a dogfighting operation at a home he owned in Virginia, Michael Vick was reinstated to the National Football League on a conditional basis, according to an NFL statement Monday. 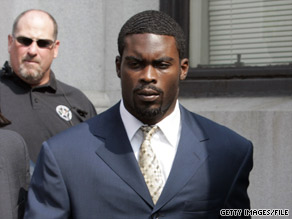 Michael Vick will be considered for full reinstatement based on his progress by the sixth week.

Vick "will be considered for full reinstatement and to play in regular-season games by Week 6 based on the progress he makes in his transition plan," the statement said. Week 6 of the NFL season is in October.

Vick may participate in practices, workouts and meetings and may play in his club's final two preseason games under the conditions of his reinstatement, the league said.

Vick, in a statement, thanked the league's commissioner and former Indianapolis Colts coach Tony Dungy, who has served as his mentor.

"I would like to express my sincere gratitude and appreciation to Commissioner [Roger] Goodell for allowing me to be readmitted to the National Football League," Vick said in a statement. "I fully understand that playing football in the NFL is a privilege, not a right, and I am truly thankful for the opportunity I have been given."

Vick, 29, was freed from federal prison at Leavenworth, Kansas, on May 20 and returned to his home to serve the last two months of his 23-month sentence in home confinement.

Vick also said in his statement that he is re-evaluating his life after the "terrible mistakes" he made.

"As you can imagine, the last two years have given me time to re-evaluate my life, mature as an individual and fully understand the terrible mistakes I made in the past and what type of life I must lead moving forward," Vick said in the statement. "Again, I would like to thank the commissioner for the chance to return to the game I love and the opportunity to become an example of positive change."

The former Atlanta Falcons player is a free agent and has not been signed by any team. Goodell said he was not involved in any negotiations between Vick and a team.

Dungy has agreed to continue working with Vick as an adviser and mentor, the NFL statement said.

"We worked with animal rights activist groups, and we are clear," he said. "We worked with their medical professionals about the aspects of our evaluations. Michael fully cooperated with all of those tests. Those tests did not indicate there was any reason he couldn't make a transition forward."

In a letter to Vick, Goodell wrote that his decision regarding full reinstatement "will be based on reports from outside professionals, your probation officer and others charged with supervising your activities, the quality of your work outside football" as well as factors such as the absence of any further law enforcement issues. iReport.com: Should Vick get a second chance?

"This step-by-step approach is not meant to be a further punishment and should not be viewed as such," Goodell wrote, according to the NFL. "Instead, it is intended to maximize the prospect that you can successfully resume your career and your life. I believe that a transitional approach with a strong network of support will give you the best opportunity to manage effectively the various issues and pressures that you will inevitably face in the coming weeks and months and earn your full reinstatement."

Watch Goodell talk about his decision »

The league suspended Vick indefinitely in August 2007 after his guilty plea. Although he was released from federal custody July 20, he must serve three years of probation, the league said.

In reviewing Vick's status, Goodell considered court records, submissions from Vick and others, reports from outside professionals and conversations with current and former players, among other items.

At a hearing July 22, Goodell spoke to Vick along with his representatives and others, including NFL Players' Association officials.

"As I emphasized to you when we met ... it is actions that count," Goodell wrote to Vick. "I accept that you are sincere when you say that you want to, and will, turn your life around and that you intend to be a positive role model for others. I am prepared to offer you that opportunity. Whether you succeed is entirely in your hands."

Vick has also filed for Chapter 11 bankruptcy. At a hearing in that case, he told the judge that he earned 12 cents an hour as an overnight janitor while in prison.

"We take this as a very serious matter," Goodell said. "We're dealing with a young man's life."

He said Vick admitted lying to him about his involvement in dogfighting and apologized. Goodell said he accepts Vick's apology.

He acknowledged that he does not like being lied to but said he intends to move forward.

The Humane Society of the United States has said Vick has offered to work with the organization on anti-dogfighting campaigns.

Wayne Pacelle, the organization's president, has said Vick was to work on programs aimed at preventing youths from getting involved in dogfighting and on programs to assist young people who have been involved.

"Your margin of error is extremely limited," Goodell wrote to Vick. "I urge you to take full advantage of the resources available to support you and to dedicate yourself to rebuilding your life and your career. If you do this, the NFL will support you."