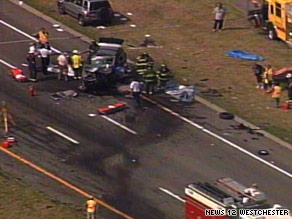 One of the vehicles in the three-vehicle wreck was heading the wrong direction, police said.

A fifth child is being treated for injuries suffered in the crash near Pleasantville, about 30 miles north of New York. Police initially reported no survivors.

The crash happened when a minivan carrying the five children and one adult was heading the wrong way on a northbound lane of the Taconic State Parkway, police said. It crashed head-on into an SUV carrying three adults.

The minivan then careened into a third vehicle before rolling over and bursting into flames, state police said.

The two adults in the third vehicle were being treated for minor injuries, police said.