WASHINGTON (CNN) -- Serving a 36-year-old government-issue cake at an Army retirement ceremony sounds like a classic bureaucratic mistake, but there was no mistake about it. 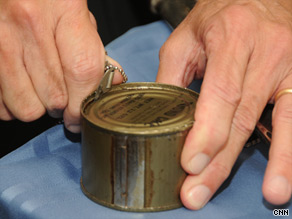 Retiring Army Col. Henry Moak served it up himself -- at his own ceremony.

Moak had saved the cake since 1973, when he got it while serving in Vietnam, and had long-standing plans to open it upon his retirement.

Pound cake served in a can was standard fare in military C rations back then. Moak said it was his favorite, and he could not get enough of it.

"I would eat it any chance I could get, but not all of the meals came with pound cake," he said before opening it.

In front of friends and family who attended his retirement ceremony Friday at the Pentagon, Moak eagerly opened the can.

Answering the question of whether the anticipation was the same now as back then, Moak said, "Yes, even more!"

"I won't eat it if it's black and moldy," he told onlookers.

"You can hear the pop of the air coming out," he said referring to the vacuum seal on the can.

To most people's surprise, the opened can revealed a still-edible yellow cake. The ceremonial sword used to cut Moak's real retirement cake was also used to dig into the can and cut out the cake.

Moak took a bite and put up his thumb, "It's good, it's still kind of moist," he declared.