(CNN) -- An Oklahoma Highway Patrol trooper was suspended Wednesday for five days without pay following a highly publicized scuffle with a paramedic in Okfuskee County in May, according to the Highway Patrol. 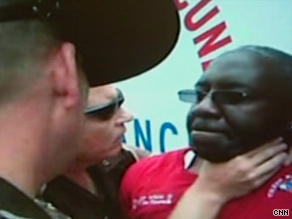 This is an image from a video that captured an Oklahoma trooper's scuffle with a paramedic in May.

The incident, which was caught on dash-camera and cell-phone video, showed Trooper Daniel Martin pulling over a Creek Nation ambulance for a traffic-stop violation. During the incident, Martin is heard repeatedly using profanity and twice getting into a scuffle with one of the paramedics.

Both paramedics and family members of the patient in the ambulance informed Martin several times by there was a patient inside, but he did not allow the paramedics to continue to the hospital while the video continued.

In a news conference Wednesday, Oklahoma Highway Patrol Captain Chris West said Martin "failed to recognize that it would have been more reasonable and appropriate to immediately allow the ambulance to continue to the hospital once he understood there was a patient onboard the ambulance."

West also said Martin had "probable cause to make the traffic stop and justification to arrest the paramedic for obstructing a police officer" but that the incident "resulted in conduct unbecoming an officer."

Martin's attorney, Gary James of Oklahoma City, did not immediately return a phone call from CNN.

In a disciplinary letter sent to Martin, Oklahoma Public Safety Department Commissioner Kevin Ward, concluded that the "disregard for the welfare of the patient [justified] severe discipline."

Martin will also be required to take an anger assessment, West said. The trooper had no previous discipline action in his record, according to West.

On Tuesday, the paramedic involved in the scuffle, Maurice White, filed a lawsuit against Martin in federal court claiming his civil rights were violated.