LOS ANGELES, California (CNN) -- Kenny Morrison soaked in life from his beachfront home. A top chef at a trendy L.A. restaurant, he served dinner to the Hollywood stars, including A-listers. 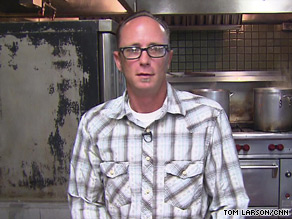 Kenny Morrison got hooked on painkillers after getting dental work in 2003. "I lost everything," he says.

But within a couple years, he lost it all. He got hooked on pain medication after some dental work. His fix was codeine, Vicodin and OxyContin -- all prescription medications -- to help him get through the day. At one point, he even had a tooth removed unnecessarily so he could get a prescription for pain medicines.

"At the height, I was taking probably 20, 25 a day," he says. "It got to the point where I lost the wife, the house, and I was living in a bad part of L.A. in my truck. And I went from taking a couple of codeine all the way to taking OxyContin."

Morrison didn't buy his drugs on a street corner or get them from a dope dealer. He got them mostly from dentists he had never met. He says he'd scroll through the phone book calling dentist after dentist until one would prescribe him pain medication.

"I kind of found out on my own that a dentist will prescribe you painkillers over the phone, instead of a doctor who you would most likely have to go in and see," he says.

Dr. Jay Grossman, a dentist in the Los Angeles area, says he routinely gets calls from people seeking painkillers. "The moment somebody hangs up the phone on me, I know that they're literally going down the book. They're calling the next one in the Yellow Pages, hoping that someone will write them a prescription," he says. "If you're an addict, one of your resources would certainly be a dentist."

Grossman sits on a disciplinary committee for the California Dental Association. He says the calls typically come at the end of the day. The user describes pain in his mouth and insists on medication fast. Red flags go up and Grossman says he begins asking a series of questions to "put it back in their ballpark."

When he asks how many pills they need, sometimes the answer is: "Forty or 50 should do just fine," Grossman says. He tries to set up an appointment for the next day, so he can see the patient in person. Most times, they hang up after he grills them.

"I don't think doctors of any sort -- whether it's a dental professional or one of my medical colleagues -- should be doling out prescriptions in that quantity, like M&Ms. That's not what it's there for," he says.

"I would like to think the vast majority of my colleagues are doing the honest, ethical and moral thing."

According to the Drug Enforcement Administration, nearly 7 million Americans are abusing prescription drugs, more than the number who are abusing cocaine, heroin, hallucinogens and ecstasy combined. The number of painkiller addicts has nearly doubled from 2000, when 3.8 million Americans were hooked, the DEA says.

The misuse of painkillers represents three-fourths of the overall problem of prescription drug abuse. The DEA says addicts get the drugs from "doctor shopping," online pharmacies and other Internet sources, theft from pharmacies and, yes, traditional drug dealers.

But the DEA says only one in every 10,000 doctors loses his or her controlled substance registration each year as a result of DEA investigations into improper prescribing.

James Stillwell, the executive director of Impact Drug and Alcohol Treatment Center in Pasadena, California, says he believes it's much more prevalent than authorities realize. He says dentists, doctors and veterinarians all become targets of addicts.

"It's an easy way to get your hands on an opiate-based drug, a painkiller, for recreational use," Stillwell says. "If you have an addict that wants to get high, ... he's going to find ways and means to do that."

There's another troubling aspect of addicts on painkillers prescribed by doctors, he says. These addicts don't think they have a problem because they have prescriptions in their hands.

"It helps you legitimize it -- not just in terms of family and loved ones, but what your head is saying to you," Stillwell says. "It's a way to elude the stigma of being a drug addict."

Grossman says the DEA has done a good job in the last 12-18 months of cracking down on dentists who may be over-prescribing pain medicines. According to the DEA, 38 states have enacted legislation to create a database for physicians and pharmacists to prevent abusers from obtaining multiple prescriptions.

Grossman says the DEA notifies dentists and questions them when their prescriptions for painkillers reach high numbers. "They're actually following up," he says.

But he says for a dentist to come before his local disciplinary board, the board first needs to be notified that a dentist may be acting out of line -- and a drug abuser typically isn't going to turn them in.

Grossman believes the issue has come under scrutiny in the last year because "of the celebrities that have been passing away due to drug overdose." Heath Ledger and Anna Nicole Smith had each taken a lethal combination of prescription drugs.

He said dentists, doctors and pharmacies constantly need to be on alert for people trying to use medical professionals as their drug dealers. "Just writing a prescription for the pain is not the answer," Grossman says. "There's a moral and ethical code that we have to follow."

As for Morrison, he says he has been clean for a year after going through Impact's program. He's now the head chef at the treatment facility that saved his life.

It has been five years since his life fell apart. He's trying to repair his relationship with his daughter and his ex-wife. He wants others to avoid the painful painkiller path he took.

"My body craved it, and I lost everything -- everything," Morrison says. "It's hard to understand how big of a problem this is. My message is it's a disease and it needs to be addressed."

All About Prescription Drugs • Drug Addiction • Addiction and Recovery