Ohio boy sells his toys to help his family

(CNN) -- An 11-year-old Ohio boy is helping ease his family's financial burdens, one toy at a time. 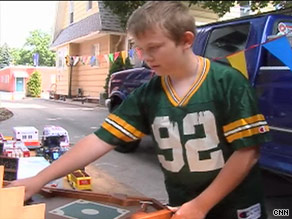 Zach McGuire wants to do his part while his family goes through hard times, so he's selling his toys.

Zach McGuire is selling his toys to raise money for his family, which like others across the country, has bills piling up and a home in jeopardy.

The youth said the idea came up during a conversation with his father.

"You can't live in toys, or eat toys," he told CNN television affiliate WNWO. "Even though they are fun, you don't need them."

Zach plans to use the proceeds for a good cause: helping his unemployed father.

Tom McGuire, a licensed contractor in Toledo, Ohio, has not had a job since December. The economy is partly to blame, he said, adding that he did a job last summer and never got paid.

As the general contractor on the job, he said, he was financially liable for materials and the work of two subcontractors. "I'm out $30,000," McGuire said.

The father said he is looking for work and is not relying on money from his son's toy sales. But he appreciates his effort.

"Zach has a big, giving heart," McGuire said. "He came to me with this idea. He wants to contribute."

Watch how Zach McGuire is helping his family »

It's not the first time Zach has helped those in need. In 2005, he sold Kool-Aid for victims of Hurricane Katrina and raised $400. A few years later, it was "Cocoa for California," which he sold to help wildfire victims.

Zach said everyone can do something.

"Even though they don't feel like they could do anything, they could do a Kool-Aid stand, like me," he said. "It's what you're doing that matters and how you're helping people."

All About Toledo • U.S. National Economy