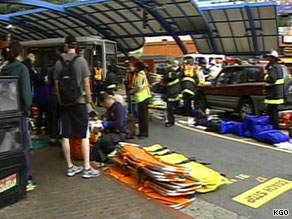 "Apparently the conductor for one of the trains miscalculated a turn. It's still under investigation right now," a police officer told CNN. He would not provide his name.

At least 44 people were injured, a fire official said.

None of the injuries was extremely serious, said Leslie Dubbin, administrator for operations at San Francisco General Hospital.

"There were no fatalities and everybody looks good."

As of 2:57 p.m. (5:57 p.m. ET), all Muni Metro light rail service that travels through West Portal Station in either direction was halted, he said.

Watch scenes from the collision site »

"There are reportedly multiple injuries as a result of the collision, but none of the injuries have yet been described as life-threatening," Judson said.

There was no estimated time for the resumption of normal Muni service.

All About San Francisco • Rail Accidents